2015 proved to be a record-breaking year for the ETF industry in Europe and worldwide. Assets in European-listed products broke through the $500 billion milestone in April, while global ETF assets crossed the $3 trillion mark the following month.

It was also a great year for the Tradeweb European-listed ETF marketplace, which was named Best ETF Trading Platform in ETF Risk’s European Rankings for the second year in a row.

Looking back at the platform’s activity in 2015, the following numbers sum up its success:

3. Overall, the proportion of ETF trades executed by integrated clients climbed to 70% in 2015, up 17 percentage points from 2014.

4. Fixed income products accounted for approximately one third of the overall platform activity. Quarter over quarter, activity in fixed income ETFs maintained an upward trend during the year: in Q4 2015 an additional €2 billion was traded in the products compared to the first quarter. 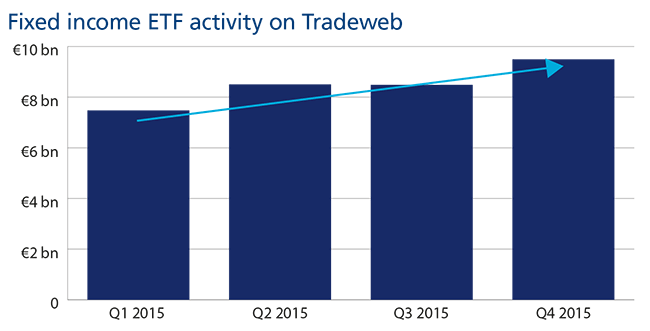 5. Last year Tradeweb joined forces with BlackRock, State Street and other global industry leaders to develop a standardised method of calculating key metrics for fixed income ETFs, identical to those for their underlying bonds. Yield and duration analytics for bond ETFs went live on Tradeweb in October 2015, with spread metrics to follow in 2016.

6. In Q1 2015 the platform added axes functionality, which provides an indication of whether a dealer is a buyer or seller of a specific ETF. The launch proved highly successful, as the proportion of completed trades increased by 5 percentage points when RFQs were sent to axed dealers.

7. Trading on the platform resulted in a saving of 3.2 basis points compared to the Exchange best bid/offer. A breakdown of the savings achieved by asset class is illustrated in the table below:

8. iShares was the top ETF issuer on the platform, followed by DB X-Trackers and Amundi.

9. Three fixed income ETFs were among the ten most heavily traded instruments on the platform during the year. However, the Amundi ETF MSCI EMU UCITS fund offering exposure to European equities was ranked first. 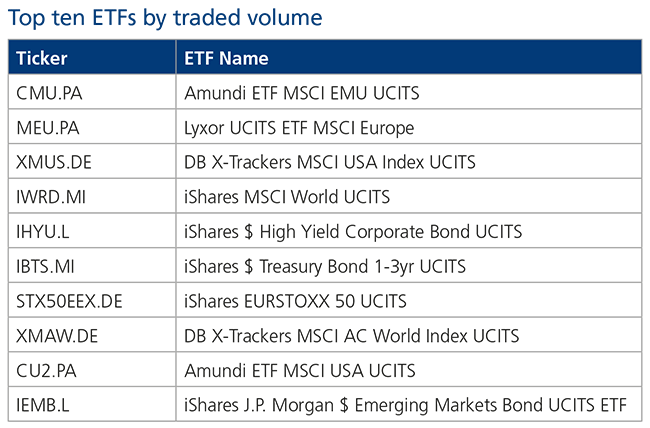