Over 60% of trading in the U.S. Treasury market is done via electronic trading venues. Many market observers believe this means that the relationships between dealers and bond investors are eroding and that the marketplace has become devoid of human relationships. The reality, however, is that roughly two-thirds of trading – including both electronic and voice – is done in a way in which both counterparties to the trade know with whom they are trading. This is not because technology makes it difficult for the market to operate anonymously, but instead because technology can increasingly be used to enhance the relationships that have allowed the market to function for decades. 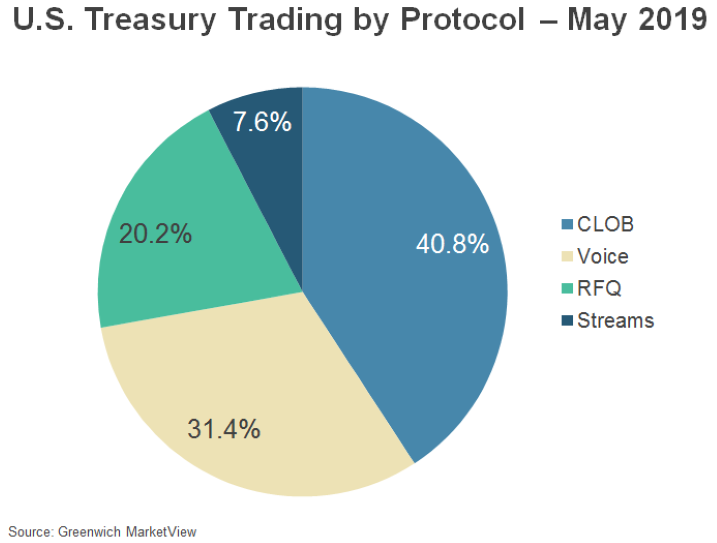 The RFQ market for U.S. Treasuries, pioneered by Tradeweb in 1999, helped traders of the time make the leap onto the screen by making their current workflow more efficient while still knowing their clients. CLOB markets, the first from Brokertec (now part of CME Group) and eSpeed (now Nasdaq Fixed Income), helped automate the already anonymous and liquid interdealer market. The CLOB market continues to serve as the benchmark price for the entire market while RFQ trading has evolved to allow further automation of the entire process.

The Best of Both Worlds

However, the advent of direct, continuous bilateral pricing streams is slowly but surely starting to shake up how the market thinks about electronic trading. Accounting for 7.6% of volume in May 2019 up from virtually zero only 5 years ago, direct streaming allows everyone – dealers, electronic market makers and the buy side – to get much (if not all) of what they get from CLOB and RFQ markets in one place. Among the early movers are Dealerweb, part of Tradeweb, as well as startups LiquidityEdge and Fenics, part of BGC Partners.

In its simplest form, direct streaming is when a dealer or electronic market maker continuously sends prices and sizes at which it is willing to both buy and sell the given U.S. Treasury to their customer. Often they will do this for every major on-the-run issue, and provide different pricing for different sizes. The customer receives both a price and size that is tailored for them, without submitting a request, so information leakage from the buy side’s perspective is eliminated pre-trade. And when those liquidity providers are willing to stream firm prices, the risk that clients might telegraph their trading intentions at-trade is also removed.

Things get more interesting, and useful, when a customer aggregates streams from all of their liquidity providers. The result is effectively a customized central limit order book of immediate, actionable liquidity. It only includes counterparties that customer knows and has agreed to trade with, and so the prices they see are tailored to the relationships they have with those counterparties. It is worth noting that FX markets also utilize a similar model.

And to take the idea one step further, clients could also aggregate liquidity from the anonymous CLOB markets with the direct streams they’re receiving from their liquidity providers, creating an even more complete picture of market liquidity. While some of their direct liquidity providers are likely also trading in those order books, it gives them the ability to act with other market participants (albeit anonymously) with whom they do not have relationships.

It has been suggested that if the use of streams continues to grow, it could disintermediate the electronic trading platforms that have grown to handle two-thirds of the market’s trading volume. History, however, tells us that this is very unlikely.

It didn’t take long for U.S. equity traders in the late 1990s to realize that managing direct connections with every trading counterparty to transmit orders and executions was inefficient, and they quickly looked to aggregators to ease the burden. The path forward for direct streaming in U.S. Treasuries, while not identical, is trending in the same direction. Platforms are already stepping in to facilitate the distribution and aggregation of direct streams. They are particularly suited for the task given they have existing connections to both liquidity takers and makers, saving everyone involved both operational and legal work. They also can provide some enhancements to the model that would be harder to do if stream aggregation was managed by each end user.

For platforms that are registered as or have agreements with a broker-dealer, liquidity makers and takers can chose to trade with one another anonymously. By submitting their preferences to the venue in advance, clients can still feel comfortable that they are only trading with approved counterparties, and that they’re still receiving a “relationship price”. But by using the platform’s broker-dealer as the intermediary, which allows the execution to be consummated anonymously, they can limit information leakage even further.

The notion of RFQ integration could also prove interesting, and act as a gateway for buy siders thinking about trading via direct streams. If the virtual top of book price/size created by aggregating streams is shown alongside responses to an RFQ, the requestor could then chose to trade with the pricing stream rather than the RFQ counterparties if the price is better. If experience (or TCA) demonstrates the streams are consistently better, then a behavior change likely isn’t too far behind. The opportunity here is particularly interesting for platforms like Tradeweb, which already offers users RFQ and, through Dealerweb, a CLOB and direct streaming prices.

One Tool in the Toolbox

While we do expect trading via direct streams to grow in the coming years, we do not expect it (or any of the other protocols for that matter) to completely take over. The U.S. Treasury market has a particularly diverse group of participants with varying needs, trading styles and expected outcomes. While most of those do not want liquidity to fragment across many platforms adding complexity, they do want access to multiple trading protocols so they can use the one best suited for the specific situation.

Intuitively speaking for direct streams to grow the share of trading via the other three channels will have to shrink. But for those platforms and liquidity providers who remained focused on what their clients want, the opportunity overall will only continue to grow.