Corporate bond markets are at the center of the recent spike in financial market volatility. This is due to the challenge to corporate funding that the response to the COVID-19 virus has provoked.

The current financial crisis finds a vastly different financial system than that which existed in 2008. This is particularly true for corporate bond market structure. Electronic trading platforms in credit had not achieved prominence by the time of the last crisis, and it is important to recognize the key role e-trading has come to play in the bond markets, particularly in times of uncertainty.

Convertible bonds are unique because they possess elements of several asset classes in a single instrument. They are bonds that are convertible into shares under specific conditions at the discretion of the bondholder. This discretionary conversion feature means that convertibles have a volatility component like an option, making them a derivative as well. Even as bonds, convertibles are a breed apart. Over half of all convertible bonds are unrated, meaning they require extra work on the part of the investor to understand the credit component.

Convertible Bond Macro-Market Structure
The volatility component is part of what makes convertibles attractive to issuers. The value of the option embedded in the bond can be used to reduce the interest cost borne by the issuer. They are particularly useful to companies with volatile stock prices because the greater the volatility, the more valuable the option and the greater the reduction in interest costs.

Convertible bond issuance declined in the wake of the financial crisis, as low levels of volatility and relatively low interest rates made the issuance of straight bonds more attractive. Interest rate normalization and the return of volatility to equity markets in 2018 have since spurred increased issuance in convertibles, and the recent spike in both volatility and corporate credit risks will likely make them especially popular in the immediate future. Indeed, convertible bond issuance was tracking higher even before the COVID-19 crisis began.

Convertible bonds present valuation challenges in two dimensions: credit and volatility. This uncertainty has had an effect on corporate bond market structure. On the liquidity provision side, convertible bonds have historically been traded by product specialists rather than folded into industry sectors. This small community of specialists typically kept search costs low. So while requirements of MiFID in Europe increased the level of e-trading there, it has remained relatively low in the U.S. That said, its acceptance and adoption has been accelerating.

Convertible Bond Micro-Market Structure
To really understand the speed with which the market is shifting in the direction of e-trading, the place to look is the market microstructure. To investigate this further, we asked Tradeweb some questions about the nature of the activity on their platform that operates an RFQ protocol. The Tradeweb protocol works as follows: the RFQ submitter’s identity is disclosed, and it can select any number of firms to receive the RFQ. The size of the trade must be disclosed, but the submitter can choose either to reveal whether it is a buyer or seller, or to ask for a two-sided market.

Because bid-offer spread is our proxy for liquidity and our metric for price improvement, we limited ourselves to two-sided RFQs submitted to multiple respondents. Tradeweb provided averages of various bid-ask spread responses for all RFQ submissions for calendar year 2019 and Q1 2020, which included the recent volatility.

When submitting an RFQ response, the liquidity provider is making a two-sided market around their midpoint valuation. The bid-ask spread can be slightly skewed as an indication of whether the market maker prefers to be a buyer or seller. It can be wider or narrower depending on how aggressive the responder wants to be. The spread is also a measure of their confidence in their midpoint valuation—the less certain a firm is about the midpoint, the wider they want to make the market around it.

The Value of the RFQ Protocol
Convertible bonds, as a general rule, have wider spreads than straight bonds. It is interesting to see within the Tradeweb data how wide the differences are between the average widest spread and the average narrowest spread. There seems to be a lot of variability among RFQ responders in terms of confidence in their pricing. This is to be expected, given the challenge of valuing convertible bonds, and is part of what contributes to the value of the RFQ protocol.

The responses with the highest bid and the lowest offer, the “best bid-offer” or BBO, generate the most important spread for the submitter of the RFQ. For our sample, the BBO was an incredibly tight 20 bps. This is a significant improvement over the average individual response of 67 bps. The BBO should beat the average, but what is truly extraordinary is that the BBO is also a massive improvement over the 44 bps average of the tightest RFQ responses.

One would expect the RFQ market structure to deliver tighter pricing by putting the responders into competition. This is much more significant than simply getting the spreads marginally tighter; however, it’s cutting the spreads made by the most aggressive traders by more than half. How is this possible, and how is it able to do that consistently quarter after quarter?

There are two reasons for this. The first is the combination of the RFQ protocol and the difficulty of valuing convertible bonds. Imagine that you had a bond that everyone agreed was worth $1,000, and you had three traders with bid-offer spreads of 4 points. All three would be 98–102. Then imagine that the first valued the bond at 99, the second at 100 and the third at 101, and all of them still had their 4-point spreads. Now the firm that had the 99 valuation is the best offer at 101, and the firm with the 101 valuation is the best bid at 99. Thus, a small disagreement in the valuation of the underlying, and no individual spread narrowing, has cut the BBO in half. This effect is especially profound in convertible bonds.

How do we know this? We can look at the frequency of locked and crossed markets. Imagine, in the above example, that the discrepancy was wider still, with our three firms using valuations of 98, 100 and 102. Now the firm with the 98 mid is offered at 100, while the firm with the 102 valuation is bidding 100. The market is locked, and the RFQ submitter effectively has a choice price, or zero execution costs, whether a buyer or seller. A crossed market is one where the bid is higher than the offer.

The second reason is a bit more subtle. Something notable about the frequency of locked and crossed markets is remarkable consistency through time. That is, the firms submitting them do not adjust their markets over time to take into account the valuations for other firms, slowly learning and eliminating the advantage of the RFQ protocol. The reason for this is that RFQ markets do not clear. The only firm that can effect a transaction in an RFQ market is the submitter, so the only two firms aware of the transaction are the submitter and the winner. RFQ responders who would otherwise trade with each other never know that there is a potential transaction to be made with another firm— the nature of the protocol does not alert them to the possibility that their midpoint might be off.

Conclusion
Given the power of the RFQ protocol, it’s easy to see why e-trading is growing in popularity in the convertible bond world. Just look at how traders respond when asked how they choose their dealers. The most popular reasons are which broker displayed the best price most recently and the second is whether the firm is axed. These are both proxies for which firms have the greatest interest in trading because they are trying to secure the best level and the tightest spreads. This is precisely what the RFQ protocol conveys to the user on a permanent basis. 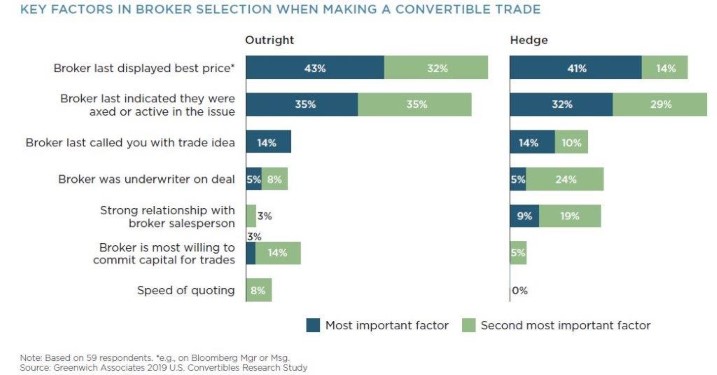 The Greenwich Associates data demonstrates this quite well, if you assume that traders make the same prices in an RFQ response as they would make over the phone. Even if you knew in advance who was the best axe in every name you called for the past five quarters and you called that person on the first try, the RFQ protocol would still have cut your trading costs in half every time, had you used it instead. The RFQ protocol doesn’t merely put traders in competition; in markets for assets that are hard to value, it puts the valuations in competition as well. It levers the uncertainty about the quality of the bonds into certainty about the quality of the execution.

METHODOLOGY
Between April and August 2019, Greenwich Associates interviewed 79 investors at funds domiciled in North America and Europe that trade U.S. convertible bonds. Respondents were asked a series of questions about their activity in the U.S. convertibles market, including proportion of volume executed by broker, primary convertibles investment strategy, proportion of convertibles volume executed via multidealer platform, as well as key factors that are most important to the trader when deciding which broker to engage.

In addition, senior analysts from Greenwich Associates worked with data provided by Tradeweb, a multidealer platform operating an RFQ market for convertible bonds, in order to understand the nature of activity present in the electronic market.

Click here to learn more about our convertible bonds platform.