Global government bonds rallied in November as expectations that central banks could slow the pace of monetary tightening led to a decline in yields. Economic data in Europe also indicated a slight drop in inflation as many European ten-year benchmark notes rebounded. Greece was the greatest mover in November and closed the month with a yield of 4.15%, a 48-basis point drop from the month prior.

In the U.S., the Federal Open Market Committee (FOMC) met on November 1-2 and raised its benchmark interest rate by 75 basis points, to a range of 3.75% to 4%. This marks the FOMC’s fourth consecutive rate hike and sixth one this year. However, the meeting minutes released on November 23 indicated policymakers expect to switch to smaller interest rate increases “soon”, as they evaluate the impact of monetary tightening on the economy. The 10-year U.S. Treasury mid-yield ended the month at 3.70%, a nearly 38-basis point drop compared to October.

Across the Atlantic, economic data from the European Union’s statistics agency Eurostat showed that consumer prices in November fell to 10%, down from 10.6% the month prior. It is the first time in 17 months that inflation in the eurozone has fallen. The German 10-year Bund yield decreased by 21 basis points, ending November with a closing yield of 1.94%. Its Italian equivalent was the second greatest mover, ending the month with a yield of 3.88%, a 42-basis point decline from the end of October.

In the UK, the Bank of England (BoE) launched its quantitative tightening program on November 1 and held its first auction as it looks to offload £838bn of government bonds accumulated over more than decade. The BoE’s Monetary Policy Committee (MPC) also met on November 2 and voted by a majority of 7-2 to increase the bank rate by 0.75 percentage points, to 3%. It is the largest hike since 1989 and made in the face of rising inflation. On November 16, the Office for National Statistics said UK inflation hit a 41-year high in October, rising to 11.1% as energy and food prices soar. However, the yield on the 10-year UK Gilt still dropped as economists believe prices and inflation to have peaked, and ended the month at 3.17%, a 35-basis points drop from the month prior.

In Asia-Pacific, the Reserve Bank of Australia (RBA) continued to slow the pace of interest rate hikes and lifted its cash rate by only 25 basis points to 2.85% on November 1. According to meeting minutes, the board signaled it may pause further interest rate rises and is ‘prepared to keep rates unchanged’, as it manages inflation and the economy. The yield on the Australian 10-year note ended the month at 3.59%, a 22-basis point decrease from the previous month. In Japan, the nation’s core consumer inflation rose to its highest level in 40 years, hitting 3.6% and exceeding expectations from economists. The Japanese 10-year government bond ended the month with a closing yield of 0.25%, a 1-basis point increase from the end of October.

The Bank of Japan’s next committee meeting will take place on December 19. 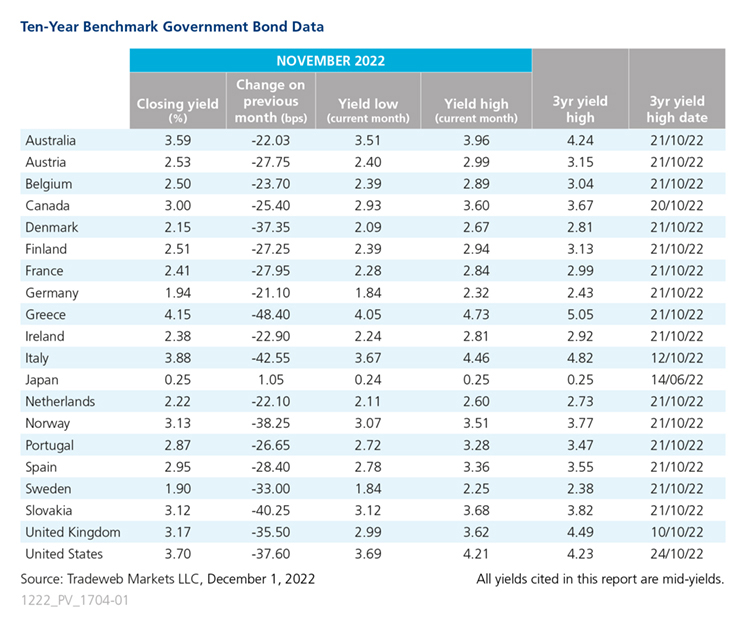