As central banks around the world are aggressively tightening monetary policy to curb the rise of inflation, ten-year government bond yields have continued their ascent, with all major notes hitting 3-year highs in June. Many policymakers expect interest rate hikes to continue throughout the year, adding pressure to global bond markets.

The European Central Bank (ECB) confirmed in a monetary policy meeting on June 9 it would raise interest rates at its next policy meeting in July. The ECB Governing Council aims to lift its key interest rate by 25 basis points and expects to hike again in September. Across Europe, bond yields rose with the greatest mover for the month being the Netherlands, gaining 43 basis points for a closing yield of 1.73%. Belgium wasn’t far behind, increasing by 42 basis points from the month prior, for a closing yield of 2.05%.

In Germany, the 10-year Bund mid-yield climbed 24 basis points to 1.37%, its highest peak in three years. According to the Federal Statistical Office (Destatis), the inflation rate in the country - measured as the year-over-year change in the consumer price index (CPI) - was expected to be +7.6% in June.

In the U.S., the Federal Open Market Committee (FOMC) raised its benchmark interest rate by 0.75% on June 15, its largest increase since 1994. Jerome Powell, chairman of the FOMC, said he expects to see another increase of 50 or 75 basis points at the committee’s July meeting. Other officials also significantly cut their economic growth outlook for 2022, now anticipating just a 1.7% gain in GDP, down from 2.8% in March. The U.S. 10-year Treasury note ended the month with a closing yield of 2.97%, 13 basis points higher than the previous month.

Following suit, the Bank of England’s Monetary Policy Committee (MPC) voted by a majority of 6-3 to increase the bank rate by 0.25 percentage points to 1.25% at its June 16 meeting. At the annual ECB conference in Sintra, Portugal on June 29, Bank of England governor, Andrew Bailey, said he did not rule out raising rates by 50 basis points at the committee’s next meeting in July. The MPC is forecasting inflation to surpass 11% later in 2022. The yield on the 10-year Gilt rose by almost 15 basis points, ending the month at 2.26%.

In contrast to the global reaction to rein in inflation through monetary tightening, the Bank of Japan (BOJ) met on June 16 and June 17 and stuck to its ultra-low interest rate policy despite the yen falling to 24-year lows. Policymakers believe the BOJ must maintain a loose monetary policy to bolster domestic demand by sustained wage hikes. Japan ended the month with a closing yield of 0.22%, almost a 2-basis point drop from the month prior. 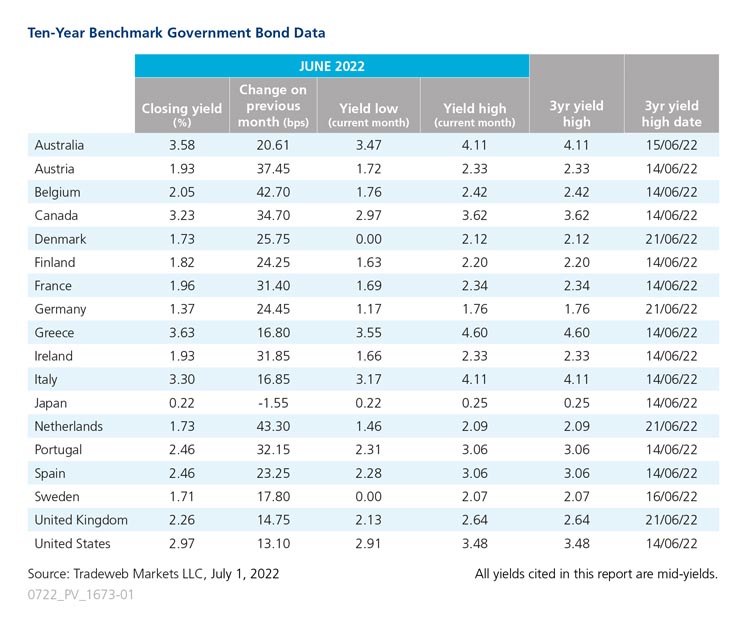