July saw several double-digit declines in 10-year government bond yields, amid a flurry of political developments and the lead up to monetary policy decisions.

In Southern Europe, Italy’s 10-year mid-yield plunged by nearly 54 basis points to end the month at 1.54%.  The decline coincided with an ongoing dispute over government spending between the European Commission and the country’s populist coalition government. In the middle of the month, finance minister Giovanni Tria stated that there was support for changes to fiscal rules among European leaders.

The yield on Greece’s 10-year benchmark bond also experienced a wild ride in July, dropping by approximately 38 basis points to 1.92%. On July 25, the yield spread between the note and its U.S. Treasury equivalent reached its lowest level since 2007. Earlier in the month, voters had elected a new government led by Prime Minister Kyriakos Mitsotakis, whose party ‘New Democracy’ secured a majority of 158 seats in the 300-member parliament.

At its July meeting, the European Central Bank maintained its monetary policy, but signalled that fresh stimulus might be in the offing in September. Germany’s 10-year Bund mid-yield fell by 15 basis points to close out the month at -0.48%, a record low. Problems in German manufacturing appeared to be getting worse, as data from IHS showed activity in the sector hitting a seven-year low.

In the run-up to the Bank of England’s decision to hold interest rates steady on August 1, the yield on the 10-year UK Gilt declined by 22 basis points to finish July at 0.62%. The month also brought about a change in British government, with Boris Johnson assuming office as the country’s new Prime Minister following Theresa May’s resignation in June.

Unlike its European counterparts, Japan’s 10-year bond yield ended July 0.4 basis points higher at -0.16%. The country’s central bank left rates unchanged, but promised additional easing if warranted by economic conditions. The Bank of Japan has pursued a policy of negative interest rates for the last 3.5 years.

Similarly, the Canadian 10-year benchmark yield rose 0.9 basis points to end July at 1.48%. The Bank of Canada held its overnight rate at 1.75% citing trade concerns, despite improvements in the domestic economy.

The yield on the U.S. 10-year note climbed by 2 basis points over the month to close at 2.02%. The Federal Reserve cut interest rates by a quarter percent on July 31, the first such move in more than a decade, to “insure against downside risks from weak global growth and trade policy uncertainty”. 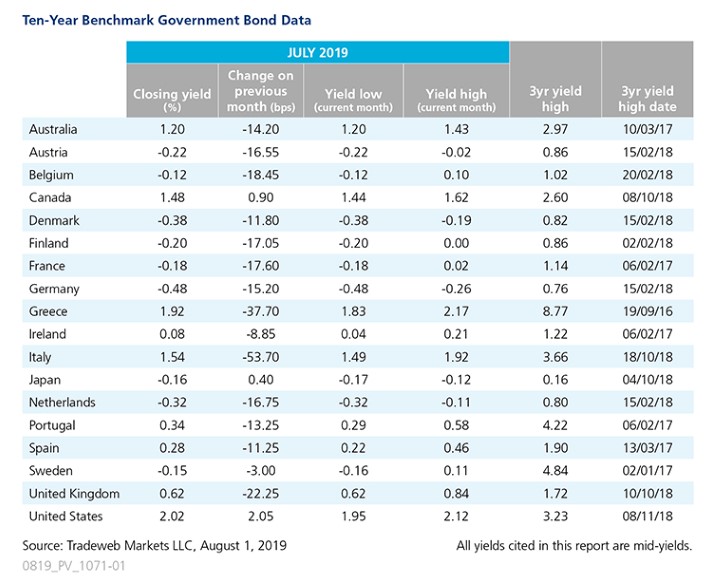