Global government bond yields ended the month of August higher as rising inflation continues to be a key concern for policymakers across the world, prompting central banks to adopt further measures to alleviate inflationary pressure.

On August 3, the Bank of England’s Monetary Policy Committee (MPC) voted by a majority of 8-1 to increase the Bank Rate by 0.5 percentage points, to 1.75%. UK inflation hit a 40-year high in August as the consumer price index rose to 10.1%, surpassing the forecast of 9.8%. Food and energy prices continue to soar, as Russia’s invasion of Ukraine has led to increases in the price of gas. The MPC expects inflation to top out at 13.3% in October. The 10-year Gilt hit a 3-year high on August 31, concluding the month with a closing mid-yield of 2.80%, a 94 basis point increase from July.

Jerome Powell, U.S. Federal Reserve Chair, spoke at the central bank’s annual economic symposium in Jackson Hole, Wyoming on August 26. He delivered his most hawkish speech yet, emphasizing that the Federal Open Market Committee “must keep at it until the job is done” when it comes to raising interest rates to tame inflation. The U.S. 10-year Treasury note increased 49 basis points over the month, for a closing yield of 3.1%.

Similar sentiments were echoed throughout Jackson Hole on August 27. Isabel Schnabel, a European Central Bank (ECB) executive board member, and François Villeroy de Galhau, governor of the Banque de France, commented that European monetary policy would have to remain tight for an extended period of time and that a larger “sacrifice” will be needed to combat inflation. The ECB is expected to continue hiking rates at their upcoming committee meetings. The yield on the French 10-year benchmark note moved 78 basis points higher for a month-end value of 2.1%, while the German 10-year Bund yield ended the month with a closing yield of 1.54%, 77 basis points higher than July.

Italy was the third greatest mover in August, behind Greece and the United Kingdom. The country is dealing with concerns over rising inflation and upcoming elections on September 25. The Italian 10-year note ended the month 82 basis points higher with a 3.8% closing yield.

In Japan, monetary policy continues to centre on ultra-low rates and dovish guidance. Bank of Japan (BOJ) board member, Toyoaki Nakamura, said the BOJ will maintain its guidance and ruled out tweaking its ultra-low interest rates to stem the yen’s fall against the dollar. Japan’s 10-year government bond yield increased almost 5 basis points, ending the month of August at 0.22%. 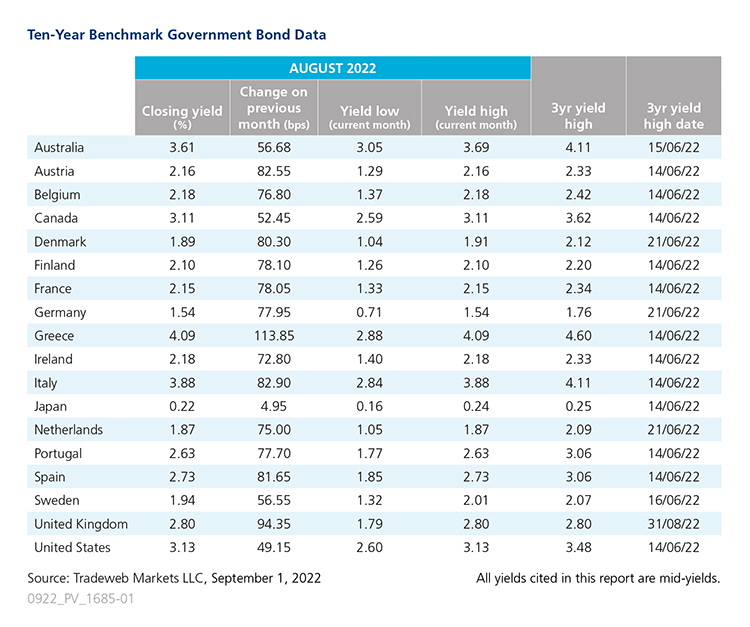