Ten-year government bond yields declined across the board in July, with those for Italy and Greece once again seeing the biggest moves. The mid-yield on the Italian 10-year benchmark note ended the month at 1%, a drop of 24 basis points from June’s close. Its Greek equivalent fell 16.5 basis points to finish at 0.96%, nearing the record low close reached on February 14, 2020. Fitch Ratings affirmed Italy's Long-Term Foreign-Currency Issuer Default Rating (IDR) at 'BBB-' and Greece’s IDR at 'BB'. The agency left its outlook for both countries as ‘stable’.

Ireland’s 10-year bond yield also declined by double digits during the month, falling by nearly 12 basis points to close at -0.13%. On July 7, the European Commission said that it expected the country’s economy to shrink by 8.5% this year, compared to an earlier forecast of a 7.9% decrease.

Meanwhile, the European Central Bank left interest rates unchanged and maintained the size of its bond buying program at EUR 1.35 trillion. The yield on Germany’s 10-year Bund ended the month 3.5 basis points lower at -0.54%. Preliminary data from Destatis released at the end of July showed that Germany’s economy had contracted by 10.1% in Q2 2020, after falling by 2% in the previous quarter.

In the UK, the 10-year Gilt yield remained in positive territory at month end, despite a drop of 8 basis points to 0.09%. The country’s Office for Budget Responsibility (OBR) projected a GDP decline ranging from 10.6% to 14.3% this year, but noted a base case of a 12.4% fall. Moody’s predicted that the economy would shrink by 10.1% in 2020 and said that stimulus, like the recent GBP 30 billion fiscal package, would help economic recovery, but would also put pressure on the UK’s fiscal position.

Across the Atlantic, the U.S. 10-year Treasury mid-yield fell by nearly 12 basis points to close at 0.54%. Some economic data snapshots suggested improvement. However, unemployment claims remained elevated and the COVID-19 cases continued to increase. The U.S. Federal Reserve kept interest rates unchanged, and pledged to maintain the bond purchases and the array of lending and liquidity programs at least at the current pace.

The Bank of Japan also decided, by an 8-1 majority vote, to leave its key short-term interest rate at -0.1% and the target for the 10-year Japanese government bond yield at around 0%. The yield on the country’s 10-year benchmark note finished July at 0.01%, just one basis point lower from the previous month end. 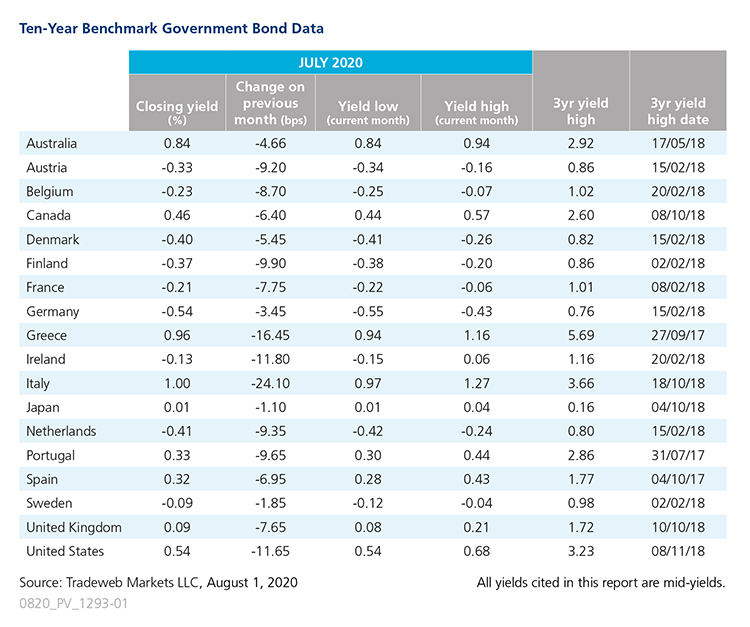