Volatility in major government bond markets was largely muted throughout August. However, a combination of broad based economic uncertainty and several looming central bank decisions, did spawn some significant yield moves in parts of the Eurozone.

The Greek 10-year bond yield also saw a significant 43 basis point increase to end August at 4.37%. Greece formally exited its third bailout program on August 20, although the country is still required to maintain a primary surplus of 3.5% of GDP until 2022, and a smaller surplus of 2.2% of GDP from 2023 to 2060.

Mid-yields on Spanish 10-year government debt rose 7 basis points to finish the month at 1.40%. Yields also increased for the Portuguese 10-year note, which climbed 18 basis points to 1.91%, and its UK Gilt equivalent, which ended August 10 basis points higher at 1.43%. Portugal’s political establishment continues to grapple with the transition away from austerity measures. Meanwhile, the Bank of England raised interest rates - for the second time in a decade – by a quarter of a percentage point to 0.75%, the highest level since March 2009.

Across the Atlantic, the U.S. Treasury 10-year mid-yield also fell by just over 11 basis points to end August at 2.85%. The Federal Reserve left interest rates unchanged at the conclusion of its two-day meeting, but reaffirmed its plans to continue raising rates at a gradual pace, citing a strong economy. In the Asia-Pacific region, the yield on Australia’s 10-year note decreased by 19.5 basis points to close at 2.49%. In contrast, Japan’s 10-year bond mid-yield rose by nearly 5 basis points to reach 0.10% on August 31. 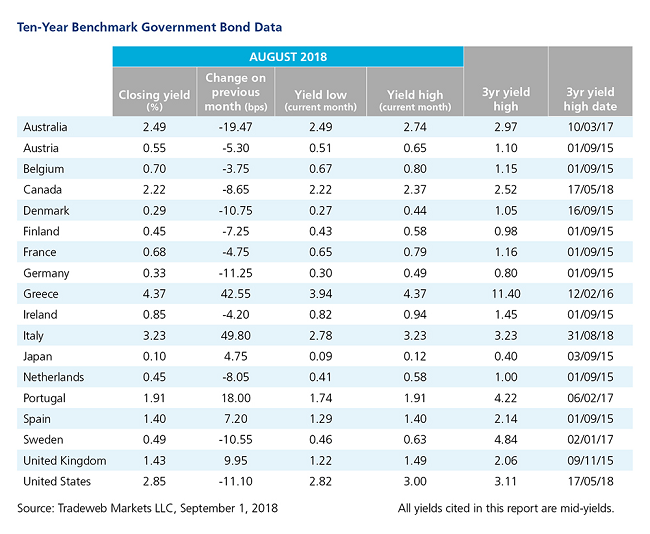