With sweeping regulatory reforms and plunging interest rates, this decade brought massive challenges to fixed income market participants. The marketplace responded with wide-reaching developments in financial services technology, and an explosion in multi-asset trading.  The journey was rarely linear, but trading volumes set new records across markets virtually each year.

Across markets and around the world, trading teams needed to find a way to do more with less. Trading strategies had to be adapted, and transaction costs became a critical discussion. At Tradeweb, we focused on making ourselves useful, using our connections across asset classes, regions, and clients to help our customers automate the busywork, operate seamlessly across time zones and assets, and do what they really just want to do anyway: find the other side of the trade.

In the passages that follow, we take a look back at some of the dynamics in fixed income markets over the past year and some of the areas in which Tradeweb offered its clients the solutions they needed to respond to market challenges.

Rise of the Multi-Asset Trader

Thanks to a combination of better trading tools, smaller trading teams and ongoing expansion of the types of fixed income instruments institutions are using, trading desks have started to move seamlessly between asset classes with robust multi-asset class trading strategies.

As evidence of the trend, consider the behavior of institutional investors on the Tradeweb platform over the course of this year. The average Tradeweb user[1] now trades four different products and uses three different trading protocols while executing over 2,000 trades a year. Additionally, over the past decade the number of available protocols for institutional clients on Tradeweb has grown from two to ten as more forms of trades have moved onto electronic trading platforms.

“The frequency of multi-asset trading is at an all-time high throughout the buy-side right now thanks largely to the increasing digitization of workflows,” said Elisabeth Kirby, Head of Rates Strategy. “By enabling our clients to trade more than 40 different products on a seamless electronic platform, we’re improving their efficiency and helping them control costs. Traders today need to be able to quickly analyze market trends based on reliable benchmarks for real-time market pricing and transaction cost analysis. With all of this information at their fingertips, the buy-side is able to do much more than ever before with far fewer resources.”

The Automated Intelligent Execution (AiEX) tool is a case study of the trend. AiEX works by leveraging a client’s existing order management system (OMS) connectivity to fully automate execution. Along the way, the technology automatically applies pre-configured conditions, such as price tolerance thresholds, minimum number of bids required to trade, and client-specific compliance thresholds. The trade is then executed according to the pre-set rules and sent back to the client, giving them more time to focus on more bespoke trades.

Over the course of 2019, a total of 23.1% of all institutional trades executed on Tradeweb was effected via AiEX. That’s up 9.6 percentage points versus this time last year, while volumes are up more than 50%.

While the phenomenon has been concentrated in Europe and Japan, U.S. debt is also trading at historic low yields. The 30-year U.S. Treasury hit a record low of 1.9% on August 28th of this year, and the 10-year U.S. Treasury benchmark has been holding below the 2% mark ever since August 1st. Shortly after the August record was set, and former U.S. Fed Chairman Alan Greenspan appeared on CNBC to say, “You’re seeing it pretty much throughout the world. It’s only a matter of time before it’s more in the United States,” U.S. President Donald Trump got in on the act, urging the Fed to cut benchmark interest rates to zero or lower. For its part, the Federal Reserve stated in its October meeting minutes that “foreign experience may not provide a useful guide in assessing whether negative rates would be effective in the United States.” 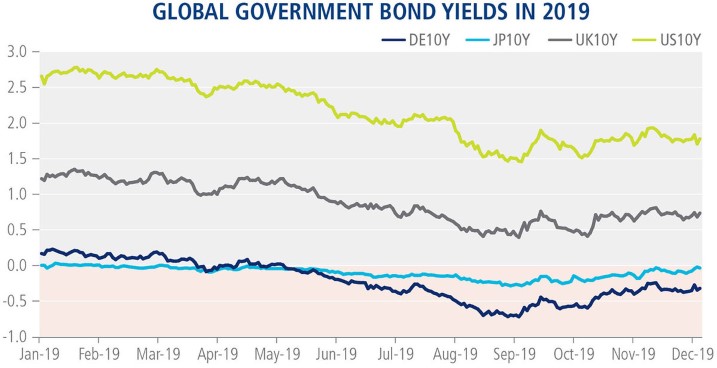 Despite the paradoxical trend of investors paying to lend money to issuers, trading activity in these negative-yielding asset classes has been robust, as asset managers continue to rely on government debt to offset risk and manage the duration of their portfolios. Year-to-date on Tradeweb, average daily volume (ADV) in U.S. Treasuries is up 17%, European government bond volumes are up 14% and Japanese government bond volumes are up 62% in USD terms versus the same period last year.

“Market participants have been adapting to the world of negative yielding debt, with some riding the rally, and others utilizing relative value and arbitrage strategies,” said Billy Hult, President. “In many ways, the ability to successfully navigate this jumbled bond market is a testament to how global and seamlessly connected these markets have become.”

Is the era of sending several spreadsheets to price one trade finally over? The advent of portfolio trading, which digitizes the market’s ability to negotiate prices for large baskets of corporate bonds is part of an ongoing evolution that’s been taking shape over the past decade as the market has begun to embrace more tech-enabled workflows. It is also a case study for how these markets could move further onto electronic platforms in the years to come.

At the beginning of the year, Tradeweb became the first marketplace to support the capability, which allows institutions to package multiple bonds into a single basket of buys and sells, negotiate a portfolio level price, and execute the trade in a single electronic transaction. Pricing and spread analytics for portfolio trades are powered by Tradeweb’s Ai-Price, which delivers real-time reference pricing for more than 18,000 corporate bonds, and counterparties negotiate via screens – rather than email. In the first eleven months of this year, Tradeweb facilitated over $35 billion in portfolio credit trades, with single transactions as large as $1bn in notional value, and has since launched the functionality in Europe.

“The $30 bn ADV and $9 trillion outstanding issuance U.S. corporate bond market has historically been divided into two segments – trades that are executed electronically, and more manual relationship-based trading,” said Head of U.S. Credit, Chris Bruner. “The introduction of portfolio trading brings electronic execution to the relationship-based market, and takes the complex paper chase that typically accompanies large credit trades out of the equation, allowing traders to focus on getting the most competitive quote. Alongside innovations like Voice Processing, and Net Spotting, it’s one of the ways we’re building a market for every credit trade.”

Over the last four years, Tradeweb’s share of total high grade TRACE volumes has risen from 3.3% to 15.7%[2] as market participants adopt new technologies and trading protocols that make markets more interconnected and transparent. As an example Tradeweb’s net-spotting, compresses interest rate risk by automatically hedging credit trades against Treasuries on Tradeweb’s U.S. Treasury marketplace – with more than $147bn processed through the service so far this year. Elsewhere, the firm has integrated streaming liquidity from Tradeweb Direct, adding more than $10bn in additional liquidity, to its institutional marketplace. 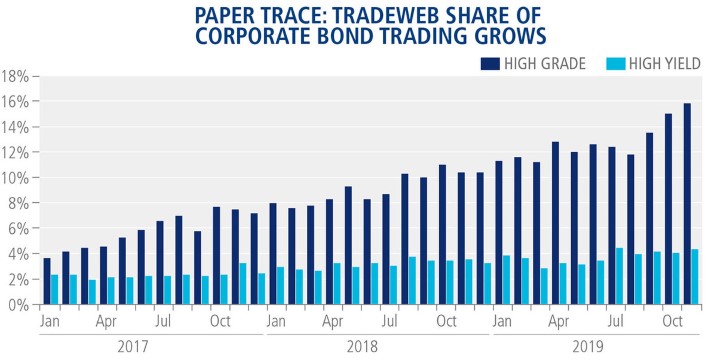 At its October meeting, the Bank of England’s Financial Policy Committee said it would consider policy action to detach participants from the London Inter-bank Offered Rate (LIBOR) benchmark before the end of 2021. It was the strongest guidance yet on its plans for officially phasing out the use of the LIBOR as the benchmark for trillions of financial instruments around the world.

Though British regulators first announced plans to phase out the beleaguered benchmark in 2017, many market participants have continued to use it. Citing challenges ranging from legal issues surrounding the wording of long-dated contracts to the complex overhauls of internal systems required to switch to a new benchmark, market participants have been understandably resistant to drop LIBOR overnight.

Despite the significant challenges involved with moving to a new benchmark, several LIBOR alternatives have been gaining significant traction in the marketplace. Currently, Tradeweb’s interest rate swaps marketplace supports multiple alternatives, such as the US Federal Reserve’s Secured Overnight Financing Rate (SOFR), the Bank of England’s Sterling Overnight Index Average (SONIA) and the newly introduced European Central Bank Euro Short-Term Rate (€STR). The SONIA benchmark has been around the longest and has had the greatest uptake so far from the marketplace. Through October, roughly 35% of GBP interest rate swaps on Tradeweb were benchmarked to SONIA. Tradeweb also automates the otherwise cumbersome process of switching to the new benchmarks by building the necessary contracting functionality right into the platform.

“We’re able to facilitate the switch from LIBOR positions into risk free rate-based swaps using our compression trading functionality,” said Enrico Bruni, Head of Europe and Asia Business. “As the largest electronic swaps marketplace, it’s been important for us to work closely with market participants to ensure we have the right connectivity to allow them to seamlessly transition between the different benchmarks regardless of when they officially transition and what standard they choose to use. This process also adds a great deal of transparency into these new indices.”

More Liquidity in the Mortgage Pool

In June of this year, the Federal Housing Finance Agency announced a long-awaited plan to create a single security for mortgages backed by Fannie Mae and Freddie Mac. The new “Uniform Mortgage-Backed Security” or UMBS was designed by FHFA to improve efficiency in the $4.4 trillion MBS market by removing the liquidity differences that existed between the two markets.

Reviews of the launch were positive: the Urban Institute called it flawless, explaining that the new UMBS “not only removes an expensive inefficiency in the current system, but it also lays the groundwork for structural reforms in the years to come. The unification of the to-be-announced (TBA) market via UMBS has a twofold benefit to the mortgage borrow. A larger harmonized pool for conforming mortgage issuance means more liquidity and lower trading friction for securities, which can lead to lower borrowing costs. A common securitization platform can in the future allow other private companies to compete with Fannie and Freddie, which can also benefit mortgage borrowers from competition.

Trading volumes in the MBS market seem to support their theory. Through November of this year, MBS volumes are up a significant 28.6% on year-to-date average daily trading volume of $172.3bn. While the refinancing boom certainly had a lot to do with that increased level of activity, the increased liquidity provided by the UMBS also helped the cause. 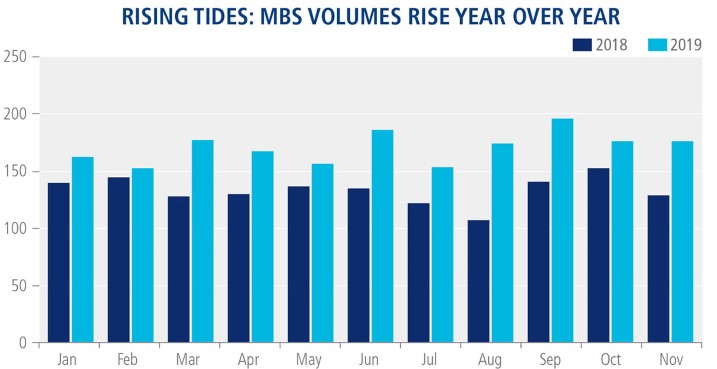 “While the MBS market has been incredibly liquid for the last decade, there has historically been an imbalance between loans backed by Fannie Mae and those backed by Freddie Mac,” said Head of U.S. Institutional Rates, Colm Murtagh. “Today, we see the benefits of that streamlined standardization, but it’s also important to recognize the serious work that went into it on the parts of Fannie and Freddie, regulators and market participants.”

Tradeweb worked closely with market participants and the federal housing finance entities in the run up to the UMBS launch, and continues to do so today.

A fundamental, long-term transition is underway across the markets, which will continue to play out for years to come. The common thread is the development and application of advanced technologies to pre-, at- and post-trade processes. Regulations are adapting to present-day capabilities and new market participants. The growing pool of market data is providing greater intelligence. Although the work may at times be difficult, the markets are becoming more accessible, transparent and resilient from the effort.

“The digitization of the global fixed income market is accelerating. New technologies provide more and better ways to access the markets, determine pricing, search for liquidity and trade electronically,” said Lee Olesky, Chief Executive Officer of Tradeweb Markets. “Just as significant – and far less appreciated – is the end-to-end electronification of the trade process, which significantly reduces risks, costs and time. The explosion of market data, which can inform more precise trading strategy and measurement, represents the next great promise. As a result, market participants are adapting to new systems at a quicker pace than we’ve seen before.”

[1] Average based on trading activity of most active 1,000 traders on the Tradeweb platform.