The second half of 2013 set the scene for a long-awaited turning point in the course of the global economy. The Federal Reserve’s decision in December to wind down its stimulus efforts came amidst positive non-farm payroll and trade reports; while growth projections for the UK were revised upwards more than once in the last quarter.

There was more good news in the New Year. The World Bank predicted more robust growth for 2014, led by a recovery in advanced economies and stronger performance by developing countries. The International Monetary Fund (IMF) also raised its global growth outlook to 3.7%, and upgraded forecasts for the US, UK and eurozone.

Weaker than expected US jobs data for December published on January 10th didn’t seem to dampen a generally buoyed investor sentiment, as it was followed by encouraging retail sales and inventory figures. This was reflected in the fixed income markets, with Europe’s peripheral economies emerging as the primary beneficiaries so far. Data derived from trading activity on European government bond marketplace helps support the view that liquidity is returning to peripheral markets: January’s traded volumes for Spain were the highest ever on the platform, and up 51.9% year on year.

Ireland’s first bond auction since its bailout exit in December raised €3.75bn, while the total order book amounted to some €14bn. Interest came mainly from European and US investors, as Ireland’s sub-investment grade sovereign rating with Moody’s might have deterred potential investors in Asia. A long-awaited review on January 17th and a subsequent credit rating upgrade by Moody’s boosted the country’s efforts to restore confidence in its growth potential. Data shows that mid-yields for its ten-year benchmark government bond dropped to eight-year lows of 3.2% on January 21st.

Hot on Ireland’s heels, Portugal saw the sale of its newly-issued five-year bonds on January 9th achieve similar levels of success, securing €3.25bn. The country is bracing itself for its own bailout exit, which could materialise as early as May 17th, according to the vice president of the European Parliament, Othmar Karas. On January 20th, ten-year benchmark bond mid-yields closed below just 5% for the first time since August 9th 2010.

Spanish ten-year government bonds are also trading at pre-crisis levels. Month-end closing mid-yields of 3.7% were only higher than those of September 27th 2006. News of an increase in 2014’s planned issuance went down well with the markets, as it was accompanied by optimistic economic indicators including growing exports and an increase in industrial production. A January 9th sale of new five-year bonds and existing paper maturing in 2028 raised more than €5.2bn. Similarly, a triple bond auction a week later yielded €5.92bn for Spain—beating the target range of €4.5bn to €5.5bn—and demand was exceptionally high for its €10bn ten-year bond sold via a syndicate of banks on January 22nd.

Italy emulated Spain and Portugal, as its borrowing costs dropped to record low levels during January‘s sovereign bond auctions. Average yields for its five and ten-year debt sold on January 30th fell to 2.4% and 3.8% respectively. Italy’s ten-year benchmark bond mid-yields closed the month at 3.8%, their lowest level since October 18th 2010. The volume of Italian government securities traded increased by 54.2% in January compared to the same month last year.

Even so, while most of Europe’s peripherals seem to be shielded from the latest concerns associated with emerging markets, this has not been true in Greece’s case. The country started the month in the same upbeat manner as its counterparts, reaching its lowest yield since May 18th 2010 at 7.6% on January 10th. Month-end mid-yields, however, were up by a percentage point at 8.6%, highlighting Greece’s vulnerability to the recent emerging markets turbulence. 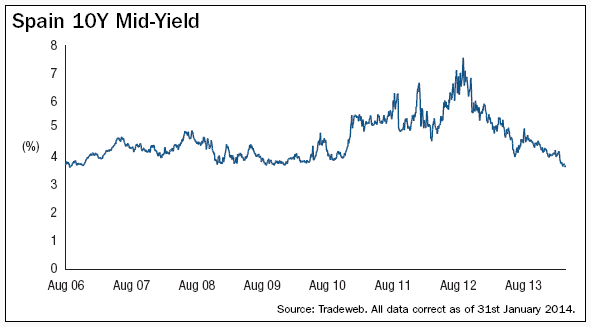 This article was originally published in the February/March 2014 issue of FTSE Global Markets.