Japan’s economy contracted at an annualised rate of 1.6% in the second quarter of the year, the Cabinet Office reported on August 17. Quarter on quarter, GDP growth shrank by 0.4% following a decline in private and external demand.

Meanwhile, consumer prices rose 0.2% year-on-year in July, down from 0.4% in June. According to data published by the Statistics Bureau of Japan on August 28, the slower pace of inflation was mainly due to a decrease in the cost of fuel, housing, transport and communication. On the same day, the Ministry of Internal Affairs & Communications reported that the jobless rate had decreased to 3.3% in July from 3.4% the previous month.

Amid heightened market volatility and growing concerns over China’s economic growth, Japanese government bonds rallied in August. After reaching month highs on August 6, mid-yields on the 5-, 10-, 20-, 30- and 40-year benchmark bonds finished the month lower. The two-year benchmark bond mid-yield, however, bucked the trend and closed the month 0.05 basis points higher at 0.01%. 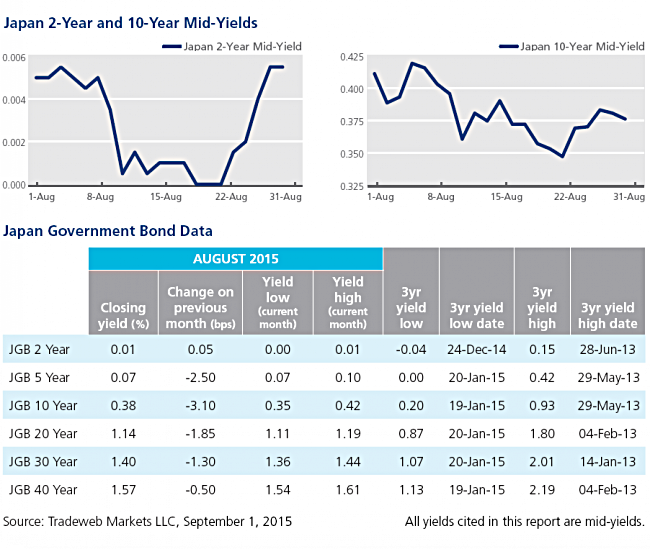