Government bond yields dropped across Europe over the course of a particularly volatile October. The biggest move occurred in Italy, where the mid-yield on the 10-year benchmark note recorded its largest monthly decline in over two years, closing out 35 basis points lower at 1.82%. Key events that dominated headlines during the month included an unexpected upgrade to the country’s S&P sovereign credit rating, from BBB- to BBB; and the adoption of a new electoral system that is expected to stifle a rising tide of anti-establishment candidates.

Similarly, Portugal’s 10-year bond mid-yield hit its lowest level since December 2015, falling nearly 32 basis points to end the month at 2.06%. In its draft budget for 2018, the Portuguese government stated that next year’s budget deficit would narrow to 1% of GDP, down from 1.4% in 2017.

Double-digit declines in government bond yields were also on tap in Spain. Against a backdrop of continued political turmoil, the yield on the country’s 10-year benchmark note finished at 1.45%, a decrease of 16 basis points from the previous month end. Prime Minister Mariano Rajoy assumed direct control of Catalonia, following the region’s declaration of independence on October 27.

A day earlier, the European Central Bank had announced that it would dial back its bond-buying stimulus program, but keep it in effect until September of 2018. Germany’s 10-year Bund mid-yield closed 10 basis points lower at 0.36%. Yields also fell in Ireland and France by 16 and 15 basis points respectively.

Elsewhere in Europe, the yield on the UK 10-year Gilt declined by 3 basis points to 1.33%. The International Monetary Fund cut the country’s annual growth forecast from 1.9% to 1.7%. However, at the end of October, third-quarter economic growth figures came in at 0.4%, higher than a preliminary estimate of 0.3%.

Across the Atlantic, the U.S. Treasury 10-year mid-yield moved up by almost 5 basis points to finish October at 2.38%. September’s nonfarm payroll data showed a loss of 33,000 jobs, the first drop in seven years. Later in the month sentiment shifted, as Q3 GDP data showed that the economy had advanced by an annualised 3%, beating forecasts of a 2.5% expansion.

Mid-yields for Japanese 10-year debt also increased in October, albeit by just a fraction of a basis point to close at 0.06%. The country started the month with strong results from the Bank of Japan’s Tankan survey measuring business confidence among large manufacturers, which had climbed to its highest level since 2007. 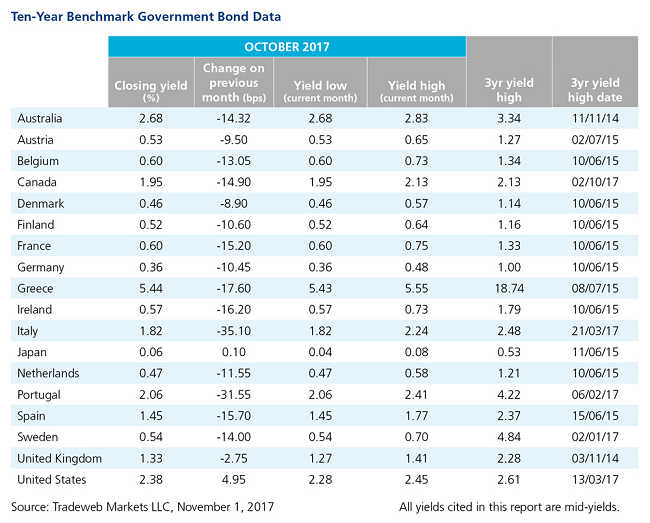