A notable milestone in the world of government bond trading was reached this November, when Tradeweb’s European government bond marketplace surpassed €3 trillion in notional volume year-to-date. This was the largest volume in a calendar year since 2013, when €2.99 trillion in government debt was traded on the European platform.

Bond yields throughout most of Europe fell during the month, as markets digested the October decision by the European Central Bank to extend asset purchases – albeit at a reduced pace - to at least next September, in an effort to reconcile strong economic growth and weak inflation.

The largest move came from Portugal, where the mid-yield on the 10-year benchmark note plunged by 19 basis points to finish the month at 1.87%, the lowest value since April of 2015. The steady decline in yields also coincided with an early repayment of €2.78 billion to the International Monetary Fund, and a great deal of speculation that a credit rating upgrade is on the horizon.

Mid-yields for Italian and French 10-year maturity bonds dropped by 7 basis points to finish November at 1.75% and 0.53% respectively. Italy’s economy grew by a quarterly 0.4% in the three months to September 2017, compared to a preliminary estimate of 0.5%. Meanwhile, French President Emmanuel Macron continued to push for labor market reforms that would boost the country’s competitiveness and address the high unemployment rate.

In Greece, government bond yields also logged a net decline in November, down 14 basis points from October 31 to close at 5.30%. The biggest drop occurred in the first half of the month, when yields dipped 26 basis points between November 1 and November 13. The country successfully completed a €30 billion debt swap on November 28, paving the way towards a full return to financial markets next year.

UK Gilt yields also fell to 1.33% on November 30, as Brexit negotiations between government officials and the European Union failed to reach an agreement. In contrast, the mid-yield on Germany’s 10-year Bund rose by nearly one basis point to finish the month at 0.37%, as economic output rose by 0.8% in the third quarter of 2017, higher than economists expected.

Similarly, the 10-year U.S. Treasury mid-yield increased by 4 basis points to reach 2.41% at month end. The Labor Department’s Consumer Price Index advanced by just 0.1% and core prices (excluding food and energy costs) rose by 0.2% from September to October. In Japan, yields on the benchmark 10-year note fell by 3 basis points during November, closing a hair above the 0% threshold at 0.03%. 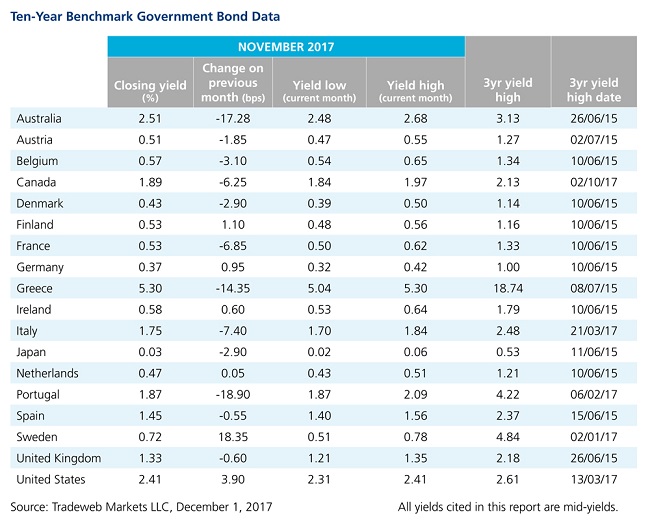