Eurozone government bonds experienced a widespread sell-off in March, with Germany’s 10-year Bund mid-yield ending the month 12 basis points higher at 0.33%, having climbed to 0.49% on March 10. Similarly, yields on 10-year government debt in Austria and the Netherlands rose by 10 basis points to 0.53% and 11 basis points to 0.42% respectively. Dutch prime minister Mark Rutte and his VVD party emerged as the winners of the March 15 election, after fending off far-right populist candidate Geert Wilders to secure 33 parliamentary seats.

March saw several central banks hold interest rates at record low levels. The European Central Bank announced on March 9 that it expected key rates to remain at present or lower levels for an extended period of time. In addition, the ECB confirmed that it would taper its monthly asset purchases from €80 billion to €60 billion in April 2017. According to Eurostat preliminary figures, consumer prices in the Euro area rose by an annualised 1.5% during March, following a 2% increase in February.

The UK Consumer Prices Index jumped to 2.3% in February, the highest inflation rate since September 2013, due to rising transport costs, particularly for fuel. The Bank of England voted 8-1 to keep interest rates unchanged on March 15, two weeks before the country’s prime minister Theresa May activated Article 50 of the Treaty of Lisbon to formally begin the Brexit process. Tradeweb data shows that the 10-year Gilt mid-yield fell 1.5 basis points over the month to close at 1.13%.

The Bank of Japan also kept its monetary policy on hold, as inflation expectations “remained in a weakening phase.” Meanwhile, GDP growth was revised up to an annualised 1.2% in the final quarter of 2016. On a quarterly basis, Japan’s economy advanced 0.3%, above preliminary estimates of a 0.2% expansion. The 10-year JGB mid-yield moved further into positive territory during March, finishing 2 basis points higher at 0.07%.

In the U.S., the Federal Open Market Committee hiked interest rates for the third time since the 2008 financial crisis. The 25 basis points move takes the overnight funds rate to a 0.75%-1% target range. Nonfarm payrolls increased by 235,000 in February, beating expectations of 190,000 new jobs, while the unemployment rate dropped to 4.7%. The mid-yield on the 10-year Treasury climbed 4 basis points over the course of the month to close at 2.39%. 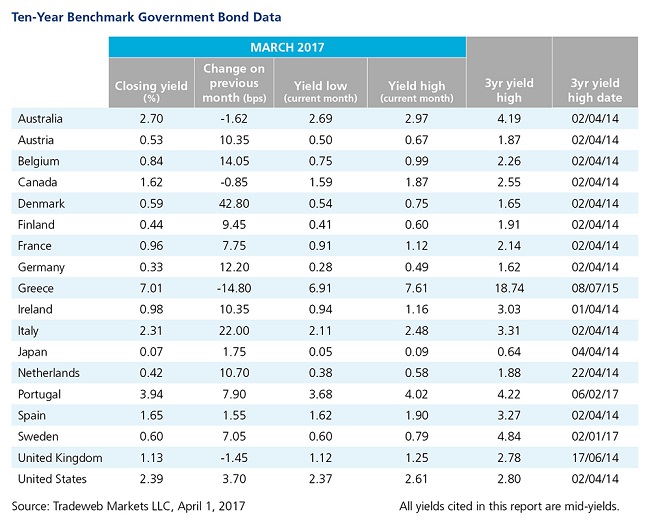