The New Year saw December’s widespread sell-off in government bonds continue, with only Greek, Portuguese and Spanish debt bucking the trend. Greece’s 10-year bond mid-yield fell by 36 basis points to close January at 3.71%. Similarly, its Portuguese and Spanish counterparts dropped by 17 and 14 basis points to finish the month at 1.74% and 1.42%, respectively. In contrast, the mid-yield on Italy’s 10-year note moved upwards in January, albeit by just over a basis point to 2.02%.

Elsewhere, 10-year benchmark bond yields experienced double-digit increases – measured in basis points - across several markets, including the U.S. The 10-year Treasury mid-yield climbed 31 basis points to close January at 2.72%, its highest closing value since April 2014. During the month, the Dow Jones Industrial Average, the S&P 500 and the Nasdaq surged, and Q4 2017 GDP came in at 2.6%, below market expectations of a 3% expansion.

Mid-yields on 10-year UK Gilts followed a similar trajectory, surging by 30 basis points to finish January at 1.49%. Earlier in the month, the Office for National Statistics noted British manufacturing and industrial production had expanded by 0.4% in November. There was also increasing speculation about the outlook for inflation and the next rate increase ahead of the Bank of England’s February 8 monetary policy meeting.

Meanwhile, the European Central Bank left interest rates unchanged, and also started paring asset purchases to EUR 30 billion a month from EUR 60 billion, a decision first announced in October 2017. The value of the Euro soared in the latter half of January, jumping 0.6% to a three-year high of 1.25 against the value of the U.S. dollar. At the end of the month, the European Union’s statistics office Eurostat estimated that the GDP for the 19 Eurozone countries had risen by 0.6% in Q4 and 2.5% in 2017 overall, its strongest annual growth in a decade.

Against this economic backdrop, 10-year German Bund mid-yields rose 21 basis points to close January at 0.63%. Similar movements were noted in other core Eurozone countries, with France and the Netherlands experiencing respective increases of 18 and 20 basis points on their 10-year benchmark bond yields.

In the Asia-Pacific region, Japan’s inflation rate of 1% for December 2017 was the highest since March 2015, mainly due to a jump in food prices. The country’s 10-year government bond mid-yield ended the month 3 basis points higher at 0.08%, while its Australian equivalent climbed 18 basis points to close January at 2.81%. Consumer prices in Australia edged up 0.6% over the last quarter of 2017, reducing the likelihood of a February rate rise lift. 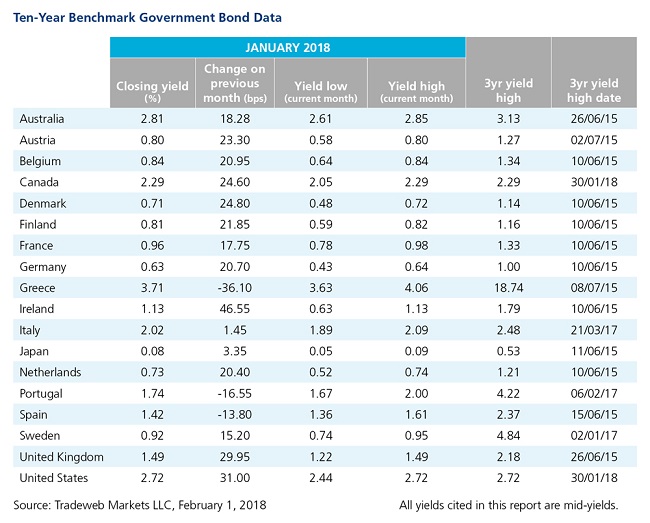