While global government bond markets largely stabilized in February, pockets of volatility persisted throughout parts of Europe and in the U.S.

Mid-yields on the 10-year U.S. Treasury bond rose by 15 basis points over the month to close at a four-year high of 2.87%. The move coincided with the swearing in of Jerome Powell as the 16th Chairman of the U.S. Federal Reserve, and growing speculation that the central bank would hike interest rates at its March 20-21 meeting.

In neighbouring Canada, 10-year government bond yields ended February five basis points lower at 2.23%. According to data published by Statistics Canada, 88,000 jobs were lost in January, the biggest drop the country had experienced in nine years, pushing the national unemployment rate up to 5.9%.

In Europe, Greek and Portuguese 10-year benchmark bond yields climbed 66 and 24 basis points to end the month at 4.37% and 1.98%, respectively. Credit ratings agency Fitch upgraded Greece’s sovereign credit rating to B from B- by, noting that the country was experiencing lower political risk and improved economic growth. Meanwhile, a flash estimate by Statistics Portugal showed GDP expansion from 1.5% in 2016 to 2.7% in 2017.

Improved projected GDP growth was also reported in Spain and Belgium, where 10-year government bond yields were up by 11 and 10 basis points to close February at 1.54% and 0.94%, respectively. Yield moves were more muted throughout the rest of Europe, with those for German Bunds and UK Gilts increasing by two basis points in a month of continued political uncertainty.

Further east, 10-year Japanese government bond yields fell by five basis points to 0.04%. A mid-February preliminary reading from Japan’s Cabinet Office reported an annualized GDP gain of 0.4%, compared to expectations of a 1% economic expansion. In Australia, the Westpac-Melbourne Institute leading index, an indicator of economic activity, showed a reading of +0.73%, compared to +1.39% in December. The yield on the Australian 10-year benchmark note declined four basis points over the month to finish at 2.77%. 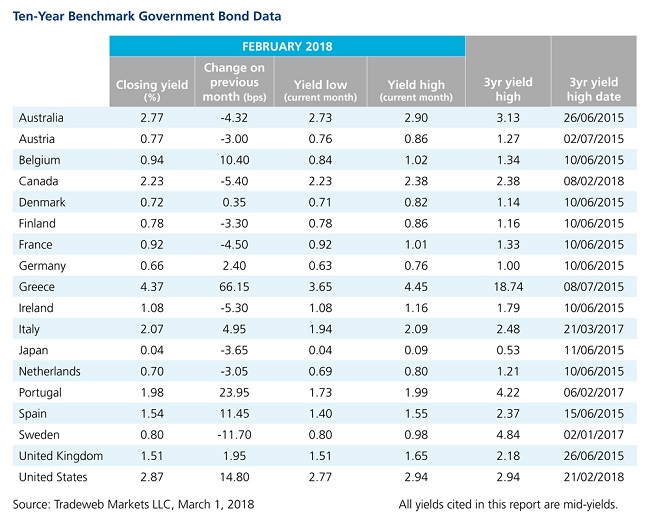