The government bond market seesaw continued in April. After declines earlier in the year, yields on benchmark notes increased over the course of the month, with those for Canada’s 10-year bond climbing 22 basis points to 2.30%. The country’s central bank kept its policy rate at 1.25%, but indicated a potential hike sometime in 2018.

The 10-year U.S. Treasury yield broke through the 3% level for the first time since January 2014, but ended April at 2.94%, up 19 basis points from the previous month end. Economic data released in April included the consumer price index showing a year-over-year gain of 2.1%, and the industrial production index showing an expansion of 0.5% compared to February’s 1% figure.

In the Asia-Pacific region, Australia’s 10-year bond mid-yield increased by 16 basis points to close at 2.76% on April 30. The Reserve Bank of Australia maintained interest rates as “there was not a strong case for a near-term adjustment in monetary policy.” Meanwhile, Japan’s 10-year government bond yield rose by one basis point to close just above the Bank of Japan’s 0% target.at 0.05%.

At its April 26 meeting, the European Central Bank left rates and its stimulus plan unchanged, after acknowledging “some moderation in the pace of economic growth” in the Eurozone. The yield on France and Germany’s 10-year notes advanced 7 basis points to finish the month at 0.79% and 0.56% respectively. Spain’s 10-year bond mid-yield closed nearly 12 basis points higher at 1.27%. According to the International Monetary Fund, Spain’s GDP exceeded that of Italy’s in 2017, as the country continued to witness an economic revival.

Elsewhere in Europe, the yield on the 10-year UK Gilt rose by nearly 7 basis points to 1.42%. The Office for National Statistics said that GDP growth of 0.1% in the first quarter of 2018 was the slowest expansion since Q4 2012. During a BBC interview on April 19, Mark Carney, the Bank of England governor, cast doubt over a May rate rise in view of the softer economic data.

Greece and Italy were the only countries to see their government bond yields drop during the month. The yield on the Greek 10-year note plunged 47 basis points to close April at 3.82%. Greece reported that it intends to keep its primary budget surplus at 3.5% of GDP until 2022, following years of debt turmoil. 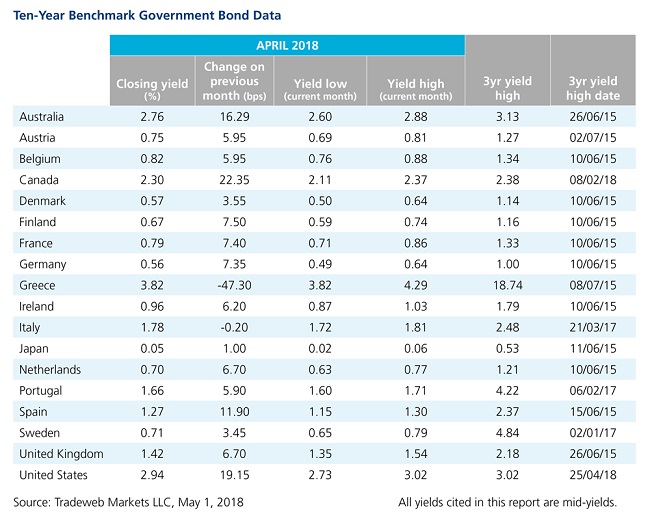