The U.S. Federal Reserve opted to maintain its benchmark interest rate at near zero levels in September, despite talk of a hike from regional Fed presidents during the summer. Earlier in the month, data published by the U.S. Bureau of Labor Statistics had shown that total nonfarm payroll employment increased by 173,000 in August. In addition, job gains in June and July were revised upwards by a combined 44,000. The Treasury 10-year mid-yield ended the month at 2.06%, after closing at 2.30% on September 16 – the highest market close value since July 22, 2015.

European government bonds rallied in September with the exception of Swedish debt; the country’s 10-year bond mid-yield finished the month at 0.71%, almost 3 basis points higher than the August 31 close. Sweden’s central bank kept its monetary policy unchanged, but said it remained ready to provide further stimulus to combat deflation. In the euro area, consumer prices dipped 0.1% in September, while the jobless rate stayed flat at 11% during August. The mid-yield on the 10-year Bund fell by 20 basis points over the month to close at 0.59%. Italy’s 10-year benchmark bond mid-yield had a similar trajectory, ending the month 22 basis points lower at 1.72%. The country’s unemployment rate decreased to 11.9% in August – the lowest since February 2013. Meanwhile, Alexis Tsipras was sworn in as Greece’s prime minister for the second time this year, after his party Syriza was voted back into power in September’s snap election. Through the course of the month, the Greek 10-year bond mid-yield dropped 83 basis points to 8.15%.

Standard & Poor’s cut Japan’s credit rating to A+ from AA- amid concerns over the government’s economic revival strategy. Prime minister Shinzo Abe, who was re-elected as leader of the ruling Liberal Democratic Party on September 24, announced that his Abenomics program was entering its second stage and pledged to increase nominal GDP to 600 trillion yen. The mid-yield on the Japanese 10-year benchmark bond ended the month 3.2 basis points lower at 0.34%. 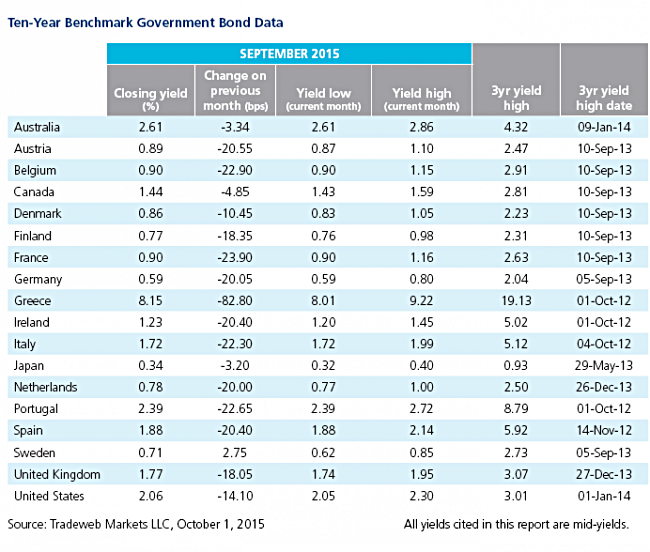