May saw April’s widespread sell-off in government bonds reverse, with only U.S. and Portuguese debt bucking the trend. The Treasury 10-year mid-yield rose by 1.5 basis points since April month end to close at 1.83%. Expectations of a further hike in interest rates increased following the release of the April Federal Open Market Committee minutes on May 18. A day later, New York Federal Reserve President William Dudley remarked that the trajectory of the monetary policy stance is “data dependent.” He also stressed that Britain’s impending European Union membership referendum would influence the Fed’s interest rate decision.

In its quarterly inflation report published on May 12, the Bank of England warned that a vote to depart the EU could materially alter the outlook for output and inflation, leading to the depreciation of sterling, rising unemployment and lower asset prices. Opinion polls conducted in late May showed growing support for the Leave campaign, increasing the probability of a ‘Brexit’ result. The mid-yield on the 10-year Gilt finished the month at 1.44%, having closed at 1.36% on May 17.

The euro area remained in deflationary territory for the fourth consecutive month in May, after consumer prices fell 0.1% year on year. This follows a 0.2% drop in April and is well below the European Central Bank’s target of just under 2%. Eurozone government debt rallied during the month, and Germany’s 10-year Bund mid-yield decreased by nearly 13 basis points to close at 0.15% on May 31. The only exception was Portugal’s 10-year government bond mid-yield, which ended the month 8 basis points higher at 3.06%. According to a report published by Moody’s Investors Service on May 24, the country’s very high debt burden is a key constraint on its growth prospects and sovereign rating.

Meanwhile, Greece’s 10-year government bond mid-yield plunged to 7.14% on May 25, its lowest level since November 20, 2015 and a decline of 163 basis points since April month end. Eurozone finance ministers agreed to release EUR 10.3 billion in new loans to the country, and pledged a package of debt relief measures in 2018. In addition, the International Monetary Fund said it would perform an analysis of the short-term debt relief measures being taken to determine its participation in Greece’s latest bailout by the end of 2016. 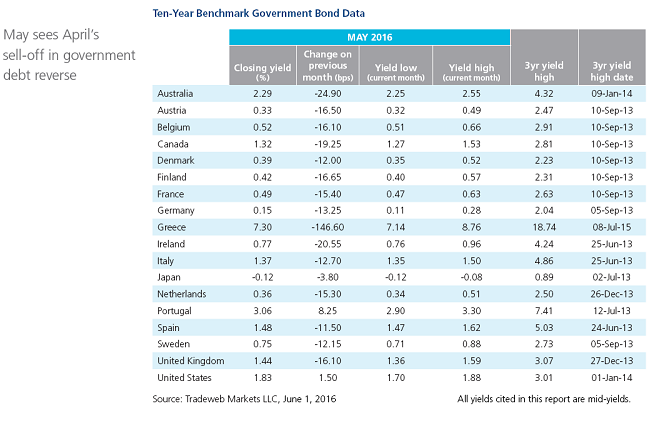