According to figures published by the U.S. Bureau of Labor Statistics on May 8, total nonfarm payroll employment increased by 223,000 in April; job gains in February and March were revised downward by a combined 39,000. On May 20, minutes of the Federal Reserve’s April meeting revealed “different views about the likely timing and pace of policy firming”. Two days later, Fed Chairwoman Janet Yellen said that she still expected the central bank to raise rates in 2015 should the economy continue to strengthen. First-quarter GDP data published on May 29, however, showed a 0.7% contraction on an annualised basis. The 10-year Treasury mid-yield ended the month at 2.09%, after peaking at 2.28% on May 13 – its highest closing level since December 5, 2014.

Euro area GDP grew by 0.4% in the first quarter of 2015. In contrast, the Greek economy shrank by 0.2%, putting the country into another technical recession after a 0.4% drop in national output in Q4 2014. On May 24, interior minister Nikos Voutsis conceded that the country might not be able to meet its June payments to the IMF. Greece’s 10-year government bond mid-yield hit its month high of 11.66% on May 26, before falling to 11.02% at the end of the month. Meanwhile, April’s widespread sell-off in eurozone government bonds continued in the first half of May. The mid-yield on the 10-year German Bund increased by 13 basis points to 0.49% during the month, having peaked at 0.71% on May 14 – its highest closing value since December 8, 2014. Similarly on May 5, Ireland’s 10-year benchmark bond mid-yield climbed back above 1% for the first time since February 24, 2015.

Elsewhere in Europe, Sweden’s inflation rate fell to -0.2% in April from 0.2% in March. In the United Kingdom, Prime Minister David Cameron secured a second term with a majority for the Conservative Party in the May 7 general election. On May 19, the Office for National Statistics announced that consumer price inflation had decreased to -0.1% over the previous year – marking the first deflationary period for the country since March 1960. The Bank of England kept interest rates at record lows in its monthly meeting the day afterwards. The mid-yield on the 10-year Gilt rose from 1.84% on May 1 to 2% on May 12 – the highest close since December 5, 2014 – but finished the month lower at 1.80%. 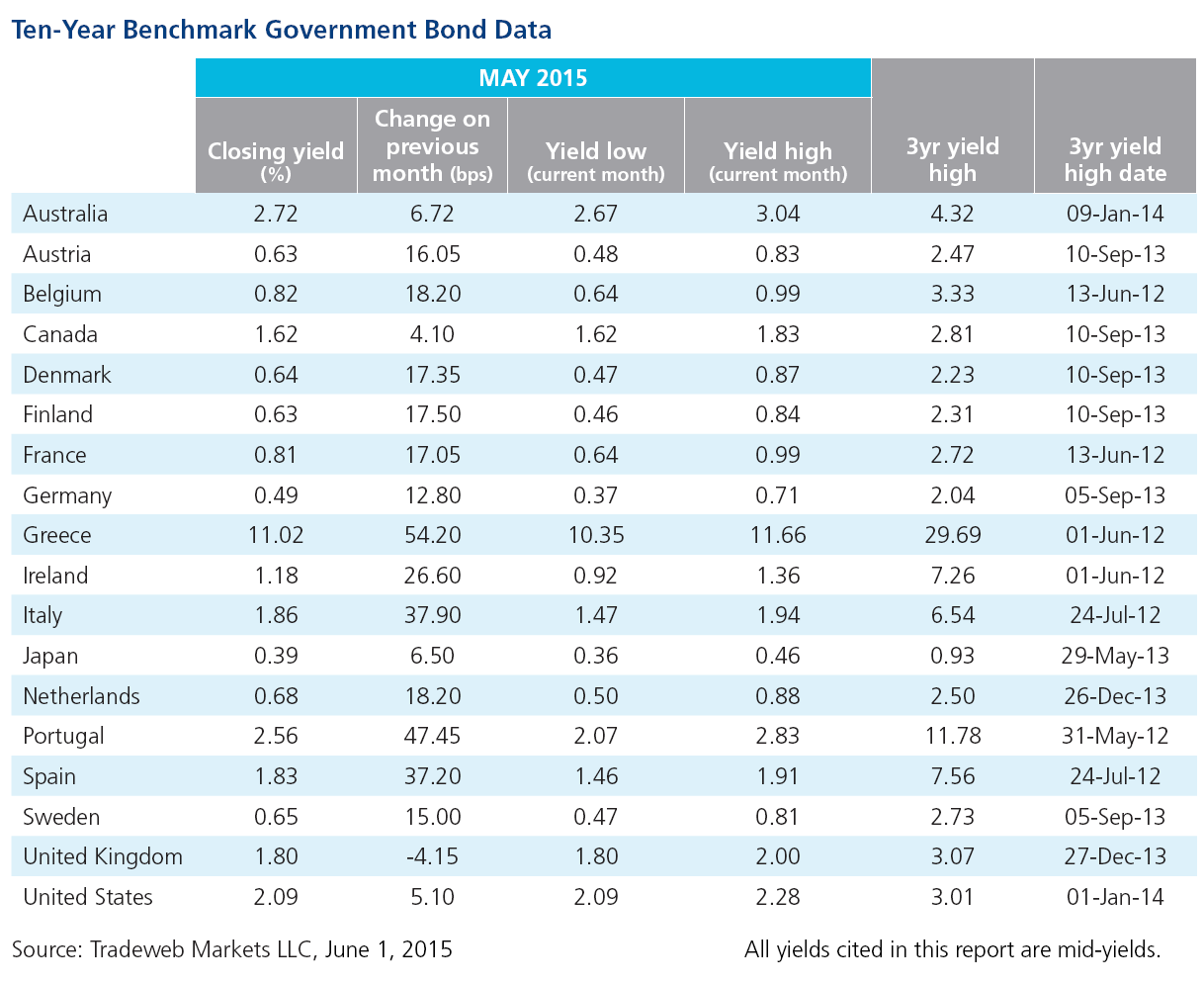