Europe’s peripheral economies experienced a month of positive news with credit ratings of two countries being upgraded. Spain’s sovereign debt credit rating was raised one level to BBB by Standard & Poor’s to a stable outlook, citing a “view of improving economic growth and competitiveness.” The mid-yield on Spain’s 10-year bond started at a month-high of 3.01% on May 1 and fell 16 basis points to finish at 2.85%. Greece’s sovereign debt was upgraded to B from B- by Fitch, which stated that “Greece achieved a primary surplus in the general government account in 2013, a key target.” The mid-yield on the Greek 10-year hit a high of 6.77% on May 16 and ended 112 basis points down from May 1 at 6.19%.

Portugal became the second eurozone country after Ireland to exit its bailout program without a precautionary credit line, with €214 billion in debt remaining on its balance sheet. The country will now look to the bond markets to cover its financing needs after the €78 billion EU and IM-assembled rescue package formally concluded. In addition, Moody’s Investor Service raised its credit rating for Portugal’s government debt on May 9 to Ba2 from Ba3 noting the country’s improving financial situation. The country’s 10-year benchmark bond started and ended the month at 3.61%, but saw some volatility hitting a month-high of 3.95% on May 20.

Portugal’s 10-year benchmark bond started and ended the month at 3.61%, but saw some volatility hitting a month-high of 3.95% on May 20 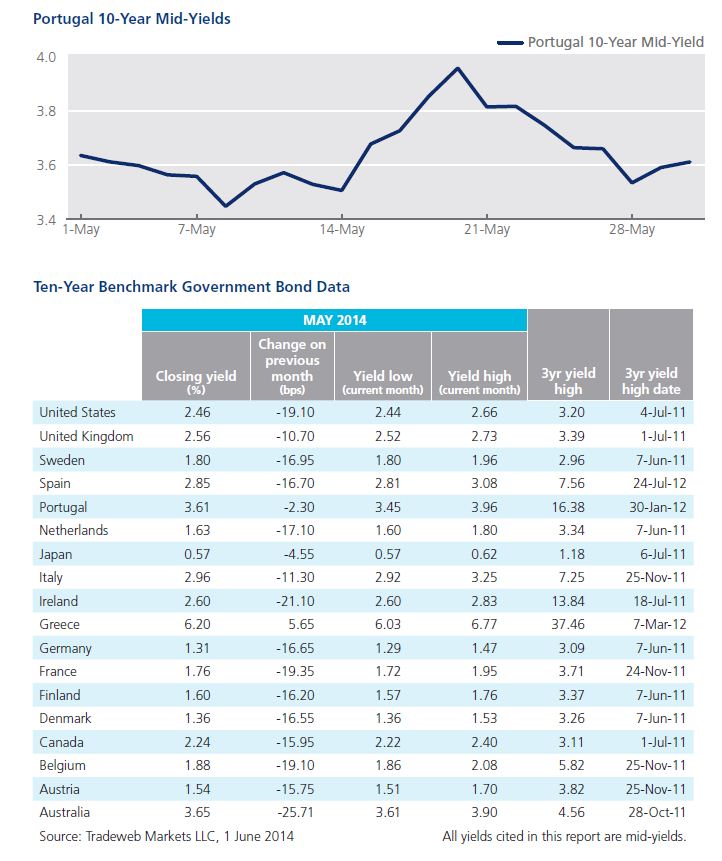