According to figures released by the Bureau of Labor Statistics on March 6, the U.S. economy added 295,000 jobs in February, while the unemployment rate slipped to 5.5%. Wage growth, however, missed estimates at just 0.1% on a month-on-month basis. The mid-yield on the 10-year Treasury closed the day at a month-high of 2.24%. On March 18, the U.S. Federal Reserve removed language describing the agency’s stance on raising interest rates as “patient” from its Federal Open Market Committee statement based on current macroeconomic growth data. The 10-year Treasury mid-yield fell below 2% that day and finished the month at 1.93%.

As previously announced, the European Central Bank launched its expanded stimulus program on March 9. Two days later, eurozone government bond yields closed at fresh record lows, including those for France (0.42%), Ireland (0.70%), Italy (1.13%) and Spain (1.08%). Portugal’s equivalent followed suit with 1.54% on March 16. Greece was the exception; the mid-yield on its 10-year benchmark bond closed at a near two-year high of 11.89% on March 19, having climbed by over 83 basis points through the day. Meanwhile, eurozone inflation rose to -0.1% in March, up from -0.3% in February, according to a flash estimate published by Eurostat on March 31. Germany’s 10-year Bund yield dipped to 0.18% at market close that day, its lowest closing value on record.

The Office for National Statistics announced on March 24 that the UK had experienced no inflation in February – the first time since comparable records began in 1989. The following day, the 10-year gilt mid-yield closed at the month’s low of 1.48%. Elsewhere, the Danish central bank resumed its sales of T-bills on March 30 after a two-month suspension, signalling that the pressure on the crown’s peg to the euro had eased.

For the first time in nearly two years, Japan’s core consumer price inflation was flat in February year-on-year, as data from its Statistics Bureau revealed on March 27. The mid-yield on the country’s 10-year government bond ended the day at 0.38%, almost five basis points higher from the previous market close. 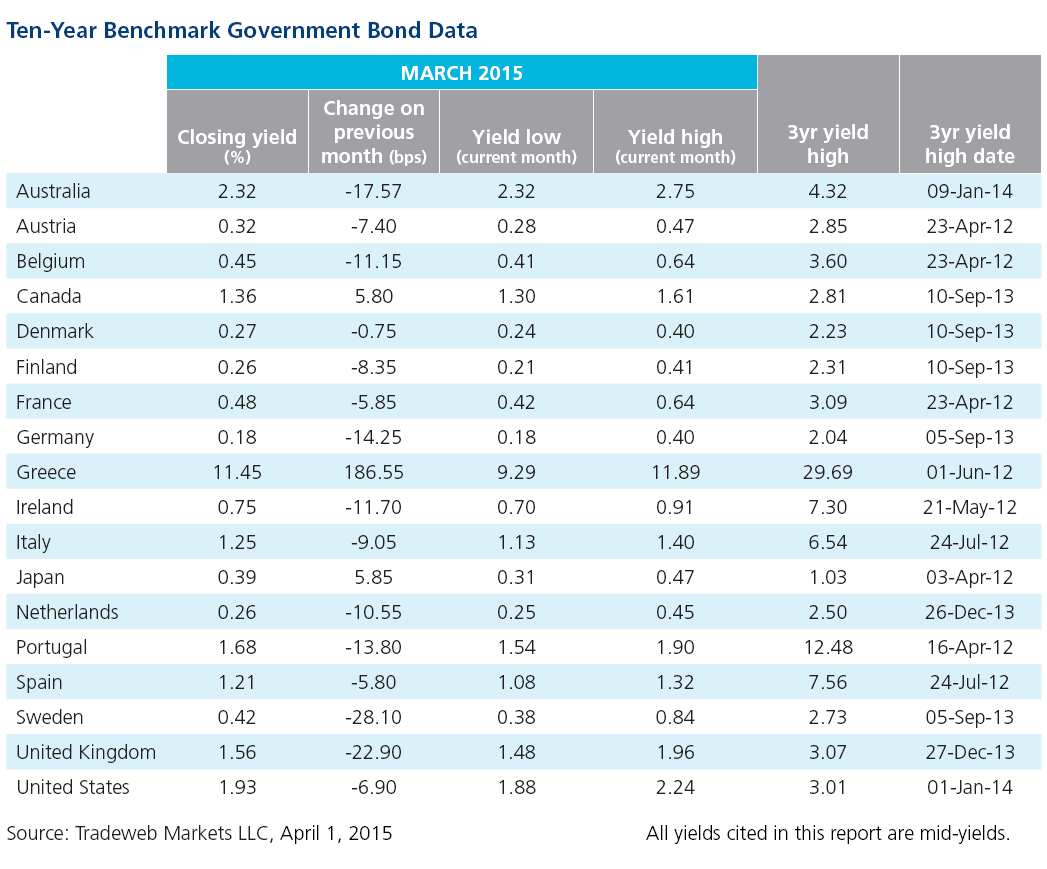