Government bond markets continued to rally in June, with the U.S. Treasury 10-year mid-yield ending the month 34.3 basis points lower at 1.49%. In her semi-annual testimony before Congress, Federal Reserve Chair Janet Yellen said that a “cautious approach to adjusting monetary policy” remained appropriate, as the pace of improvement in the labor market appeared “to have slowed more recently.” Total nonfarm payroll employment increased by 11,000 in May, according to the Bureau of Labor Statistics. However, figures for June showed job gains of 287,000 and an unemployment rate of 4.9%.

Across the Atlantic, the euro area economy advanced 0.6% quarter-on-quarter in the first three months of 2016, its strongest performance in one year and up from an earlier estimate of 0.5%. European government bond yields declined further in June, with the exception of Greek and Portuguese debt. The mid-yield on Greece’s 10-year benchmark bond climbed nearly 108 basis points over the month to finish at 8.38%.

In contrast, Germany’s 10-year Bund mid-yield turned negative for the first time ever on June 14, when it closed at -0.01%. Its UK Gilt equivalent dropped below 1% on June 27, but it remained above 0.90% at month end. Britain voted to leave the European Union in a referendum conducted on June 23, leading to the resignation of prime minister David Cameron. The pound tumbled to a 31-year low against the U.S. dollar, while ratings agencies Fitch and Standard & Poor’s downgraded the country’s credit rating from AA+ to AA and from AAA to AA respectively on June 27.

Japan’s prime minister Shinzo Abe announced that a sales tax hike scheduled for April 2016 will be delayed until October 2019 to avert deflationary risks and boost GDP growth. As the JGB yield curve ended the month negative out to 18 years, Australian government bond yields also plunged to their lowest levels on record, with those for the 10-year note hitting 1.99% at market close on June 30. The country’s central bank (RBA) left interest rates unchanged, following strong first-quarter GDP growth of 3.1% year-on-year. 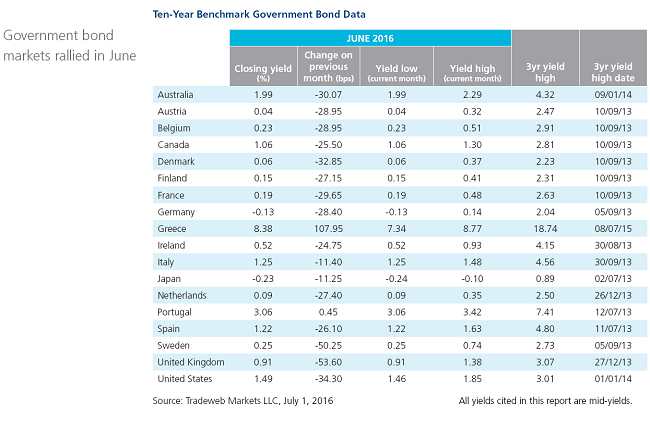