The U.S. economy added 280,000 jobs in May, while combined total nonfarm employment for March and April was revised upwards by 32,000 job gains, data from the Bureau of Labor Statistics showed on June 5. Meanwhile, U.S. consumer sentiment rose to a 5-month high in June, according to the University of Michigan's Index of Consumer Expectations, which came in at 96.1. New York Fed President William Dudley said on June 28 that a September interest rate hike was “very much in play” following the latest release of positive economic data. The mid-yield on the 10-year Treasury climbed to a month high of 2.48% on June 26, but finished the month lower at 2.33%.

In Europe, despite ongoing debt negotiations between Greece and its creditors, an agreement could not be reached before the country’s bailout program expired at midnight on June 30. Two days earlier, the Greek government had imposed capital controls to stem deposit outflows, while awaiting the results of a referendum on creditors’ terms scheduled for July 5. Standard and Poor’s downgraded Greece’s credit rating twice during the month: on June 11 from CCC+ to CCC and on June 29 from CCC to CCC-. Elsewhere, the European Central Bank kept interest rates unchanged and maintained growth forecasts for 2015 and 2016. Month-end Eurostat figures showed that the region’s inflation rate had dropped to 0.2% in June from 0.3% in May. In contrast, UK inflation rose to 0.1% in May, according to a June 16 announcement from the Office of National Statistics. Mid-yields on 10-year government debt increased during the month in several European countries, including those for Germany by 28 bps to 0.77%, Austria by 51 bps to 1.14% and Italy by 44 bps to 2.30%.

Japan’s Cabinet Office revealed on June 8 that first-quarter GDP growth was an annualised 3.9%, rather than 2.4% as previously estimated. On June 19, the Bank of Japan announced its intention to uphold its quantitative easing program and low interest rates. A week later, the country’s Statistics Bureau said that core consumer prices in May had risen 0.1% from the year before, down from April’s 0.3% increase. The jobless rate remained unchanged at 3.3%. Japan’s 10-year government bond mid-yield closed at 0.45% on June 30, after climbing six bps over the month. 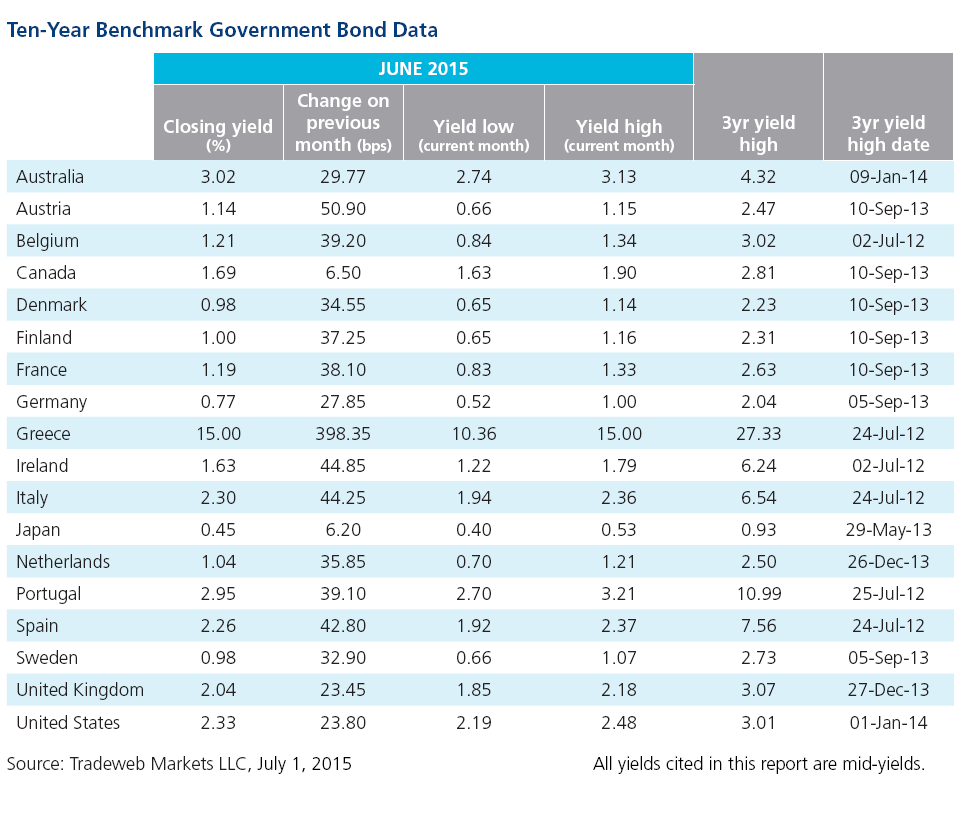