The Federal Reserve announced it would cut bond purchases by $10 billion to $25 billion following strong GDP numbers in July. The better-than-expected second quarter GDP data showed that the U.S. economy grew at a rate of 4%, following a 2.9% contraction in the first quarter. The 10-year Treasury bond note remained fairly stable during the month, with mid-yields starting at 2.56%, rising to a high of 2.65% on July 3 and ending at 2.56%. Mid-yields on U.S. long-term debt also fell, with 30-year bonds opening the month at 3.39% and closing at 3.31% at the end of July. Gilts fluctuated during the month, starting at 2.70%, dropping to a month low of 2.53% on July 29, and rising to 2.62% at month end. Similarly, mid-yields on Germany’s 10-year government bond fell 7 basis points from the beginning of the month to close at 1.17% after reaching a high of 1.26% on July 4.

Government bond yields also fell across Europe’s periphery markets in July following the ECB’s resolution to cut interest rates below zero, while introducing a multi-billion euro lending package. The yield on Spain’s 10-year benchmark bond fell below 2.50% on July 28 for the first time in more than two centuries according to Deutsche Bank. Mid-yields on the bond fell 14 basis points from the beginning of the month to close at 2.50%, after hitting a month high of 2.77% on July 14. Portugal’s credit rating was upgraded in July by Moody’s Investors Service to Ba1, one level below investment grade, with a stable outlook. Portuguese 10-year bonds saw some volatility during the month, with mid-yields starting at 3.58%, reaching a month high of 3.97% on July 10, and then falling to 3.60% on July 31. 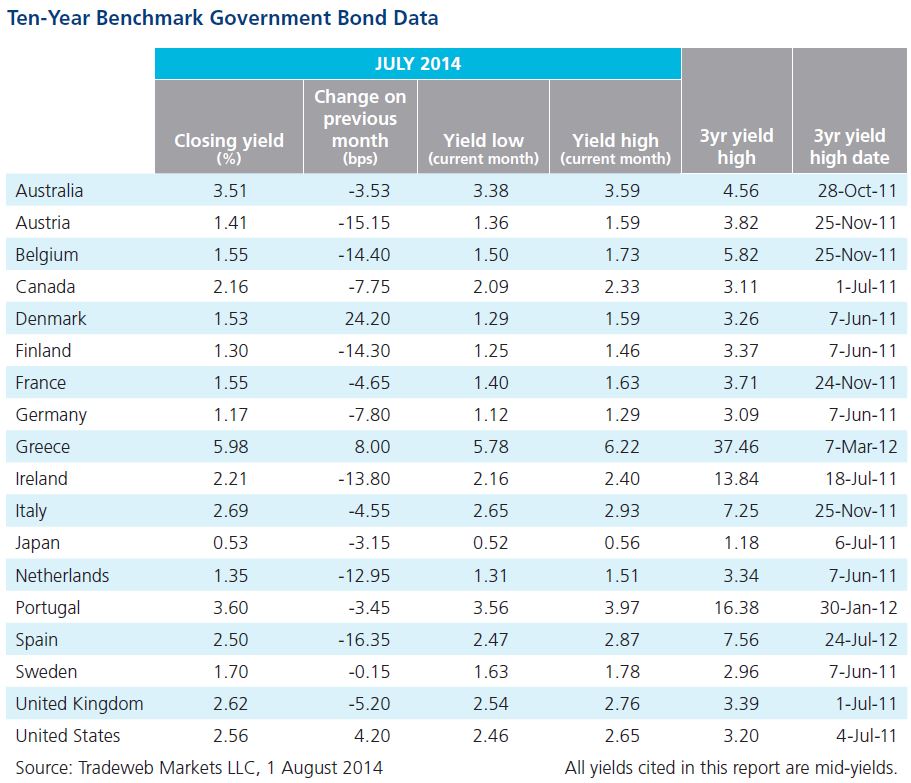