Global government bond markets rallied in January, against a backdrop of plunging equity and commodity prices. In its latest monetary policy report, Canada’s central bank downgraded its growth forecasts for 2016, citing the impact of lower oil prices on the economy. Meanwhile, the U.S. Federal Reserve kept rates on hold while pledging to closely monitor global economic and financial developments. Total nonfarm payroll employment increased by 292,000 in December 2015, while the jobless rate was recorded at 5%. The Treasury 10-year mid-yield ended January at 1.93%, 35 basis points lower on the previous month.

According to preliminary estimates published by Eurostat, consumer prices in the euro area are expected to have increased by 0.4% in January from 0.2% in December and November 2015. ECB president Mario Draghi said on January 21 that the central bank would review and possibly reconsider its stimulus stance at its next meeting in early March. The mid-yield on the 10-year Bund dropped 37 basis points during the month to close at 0.26%. Similarly, its UK Gilt equivalent finished the month 39 basis points lower at 1.57%. In December, UK inflation rose to 0.2% – its highest level in 11 months.

Unlike their European counterparts, Greece and Portugal’s 10-year benchmark bond mid-yields rose in January by 143 and 15 basis points respectively. On January 22, Standard & Poor’s upgraded Greece’s credit rating from CCC+ to B-. The agency said that the country seemed to be broadly complying with the terms of its latest international bailout.

In a surprise move, the Bank of Japan introduced a negative interest rate by a 5-4 majority vote on January 29. The -0.1% rate will apply to current accounts held by financial institutions at the bank, and will be part of a three-tier system effective from February 16, 2016. The BoJ kept asset purchases unchanged; however, governor Haruhiko Kuroda said that the bank was prepared to expand its accommodative monetary policy further if necessary. Mid-yields on the 2- and 5-year JGBs finished January at -0.07% and -0.05% respectively, while their 10-year counterpart dropped 16 basis points on the previous month end to close at 0.11%. 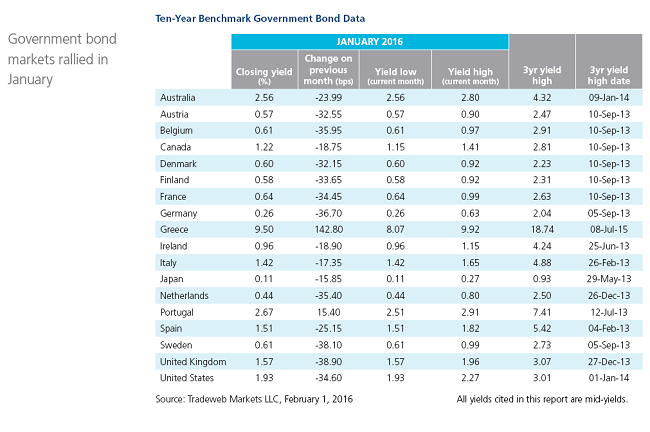