Eurozone consumer prices suffered a 0.6% annual drop in January - the largest on record since July 2009 – according to Eurostat figures released on January 30. A week earlier, the European Central Bank (ECB) had announced the launch of an expanded stimulus program, which encompasses the central bank’s existing purchase schemes for asset-backed securities and covered bonds. From March onwards, the ECB will buy €60 billion of public and private sector securities per month until at least September 2016, in a bid to revitalize the eurozone economy and combat deflation. Government debt rallied across several countries in the region. Ireland’s 10-year bond mid-yield closed barely above 1% on the day of the announcement, while the mid-yield on Germany’s 10-year Bund ended the month just 3 basis points higher than its Japanese counterpart.

In Greece, however, government bond yields climbed higher in January. As pre-election polls predicted, anti-austerity party Syriza won the majority of the electorate vote and its leader, Alexis Tsipras, was sworn prime minister on January 26. Two days later, Standard & Poor’s placed the country’s “B” sovereign rating on “CreditWatch negative”, indicating that a downgrade could take place by the next scheduled ratings publication date on March 13, 2015. The Greek 10-year government bond mid-yield increased by nearly 164 basis points over the month, closing at 11.07% on January 30 – its highest market close value since July 2013.

Elsewhere in Europe, the Swiss National Bank abolished its currency’s cap of 1.2 against the euro, and pushed its key interest rate deeper into negative territory to -0.75%. Denmark’s central bank also cut interest rates - three times in 10 days – while the country’s Ministry of Finance suspended the issuance of government debt, in an effort to limit demand for the national currency and promote longer-dated debt. The Danish 10-year government bond mid-yield continued its downward trajectory in January, falling by roughly 49 basis points to 0.34% at month end.

Across the Atlantic, the Bank of Canada surprised the markets by cutting its target for the overnight lending rate from 1% to 0.75%, in light of the risk posed to the economy by sliding oil prices. The country’s 10-year bond mid-yield ended January at 1.24%, 54.2 basis points lower than the previous month end. In the U.S., the 30-year Treasury mid-yield touched a record low of 2.26% on January 30, the same day its 10-year equivalent dropped to 1.68%, its lowest level since May 2013. 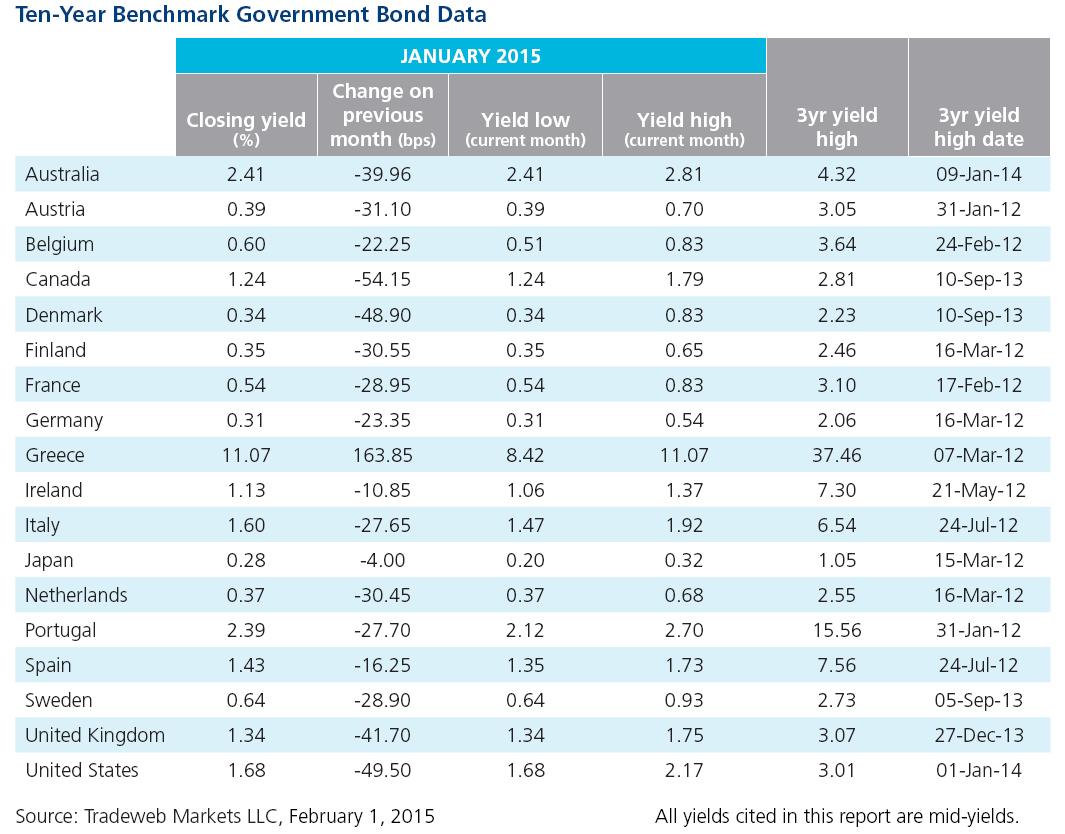