A February 24-25 general election in Italy ended with no clear winners and a significant advance for anti-austerity sentiment, unsettling financial markets around the world with renewed fear of Europe’s debt crisis. What had been a relatively calm month for bond markets turned volatile, with yields spiking higher in Europe’s periphery. Italian 10-year bond yields hit their highest levels since November 2012. Meanwhile, yields dropped in perceived safe havens such as Germany, Netherlands and France. Even yields in the U.K., which had been under modest upward pressure following a Moody’s February 22 credit rating downgrade, fell following the election. Though yields for Italian bonds recovered slightly into the end of the month, the benchmark Italian 10-year yield traded in a volatile 57 basis point range for February. Volume for Italian bonds on Tradeweb was active, up more than 15% versus January and 6% versus February 2012.

The price of the 10-year U.S. Treasury rose in February, breaking a losing streak that started in mid-November 2012 and bringing its yield back below the key 2% level. Treasury yields had been moving higher in the first part of the month, with the 10-year hitting 2.03% on February 19, its highest level since April 2012. Talk in the market was that a lot of traders were short Treasuries on the expectation that yields would continue pushing higher, but that a fierce round of short-covering was spurred by the risk-off tone following the Italian election and mounting concern about automatic U.S. budget cuts known as the sequester.

What had been a relatively calm month for bond markets turned volatile. 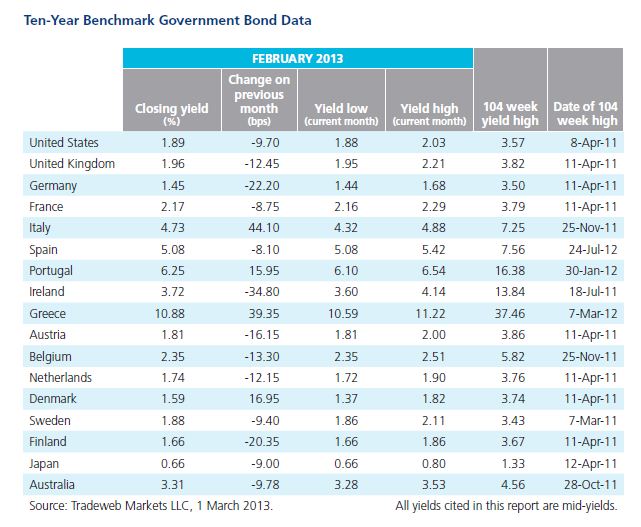