In a widely anticipated move, the U.S. Federal Reserve raised the upper bound of its federal funds rate from 0.25% to 0.5% on December 16, the first such increase in nearly a decade. A day earlier, figures published by the U.S. Bureau of Labor Statistics had showed that consumer prices increased by an annualised 0.5% in November, the highest inflation rate in 11 months. The Treasury 10-year mid-yield ended the month at 2.27%, after closing at a month low of 2.14% on December 11.

In Europe, yields on shorter-term government debt closed at record lows on December 2, including those for the French 2-year benchmark bond at -0.36% and the 5-year Bund at -0.22%. The following day, the European Central Bank announced an extension of its asset purchasing program to at least March 2017, and cut its deposit facility rate to -0.3%. Euro area inflation in November was revised up to 0.2% from 0.1% year on year by Eurostat, reaching its highest level since July 2015. Over the course of the month, European 10-year government bond yields moved higher: the 10-year Bund mid-yield gained nearly 16 basis points to close at 0.63% on December 31.

Moving in a similar direction to the ECB, the Bank of Japan expanded the range of assets within its stimulus program to include longer-term government bonds. The 10-year JGB mid-yield fell to 0.266% at close on December 29, its lowest level since January 27, 2015.

Meanwhile in Spain, the December 20 election left the country without clear leadership, as the incumbent Popular Party failed to secure a majority. Prime minister Mariano Rajoy said he would try to build a working coalition before a vote of confidence is held on January 13. The mid-yield on the Spanish 10-year government bond closed at 1.48% on December 2 - a seven-month low - before rising to end the month at 1.77%. 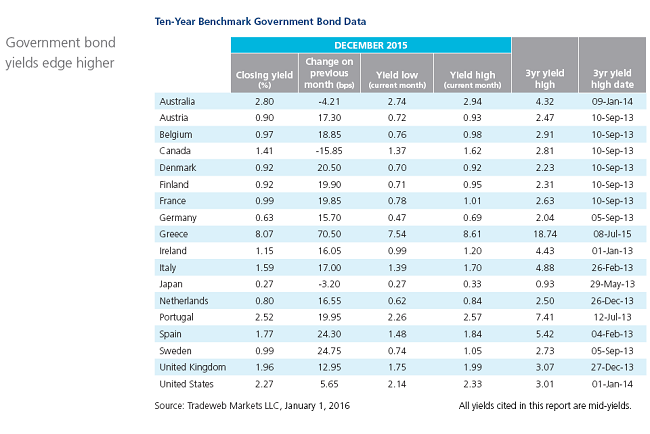