The U.S. economy grew at a stronger pace than previously estimated in the third quarter of 2014. The country’s real GDP was revised upwards to an annualized 5%, according to data released by the Bureau of Economic Analysis on December 23. Six days earlier, Federal Reserve chairwoman Janet Yellen had said that interest rates would not increase before April 2015. The 10-year Treasury mid-yield closed at 2.08% on December 16, its lowest closing value since May 2013, but ended the month slightly higher at 2.17%.

In contrast, the European Central Bank (ECB) announced it had downgraded its growth forecasts and inflation targets for 2014, 2015 and 2016. Following the ECB monthly meeting on December 4, president Mario Draghi confirmed that the central bank would re-assess its stimulus measures in early 2015, potentially including the purchase of sovereign debt. Bundesbank also cut its German growth and inflation projections on December 5. Germany’s 10-year Bund mid-yield dropped below 0.60% for the first time on December 16, and closed at the record low of 0.54% on December 30. As month-end approached, government bond mid-yields touched record lows in several other eurozone countries such as France, Italy, Ireland, Portugal and Spain. In the UK, the 10-year gilt mid-yield fell below 1.80% for the first time on December 16, before touching 1.75% at close on December 31.

Meanwhile, political uncertainty in Greece re-ignited fears over the country’s future in the eurozone. Governing New Democracy party failed to elect a head of state on December 29, forcing prime minister Antonis Samaras to call a snap parliamentary election set to take place on January 25. The Greek 10-year government bond mid-yield increased by more than a percentage point on December 29, from an opening value of 8.40% to 9.43% at market close – the highest closing value since September 26, 2013.

Russia’s economy continued to suffer from plunging oil prices and international sanctions in December. The country’s central bank raised its main interest rate from 10.5% to 17% on December 16, in an effort to stem the rouble’s collapse. The yield on Russia’s 4.875% 09/23 U.S. dollar-denominated bond rose by 118 basis points over the month, closing at 6.61%. 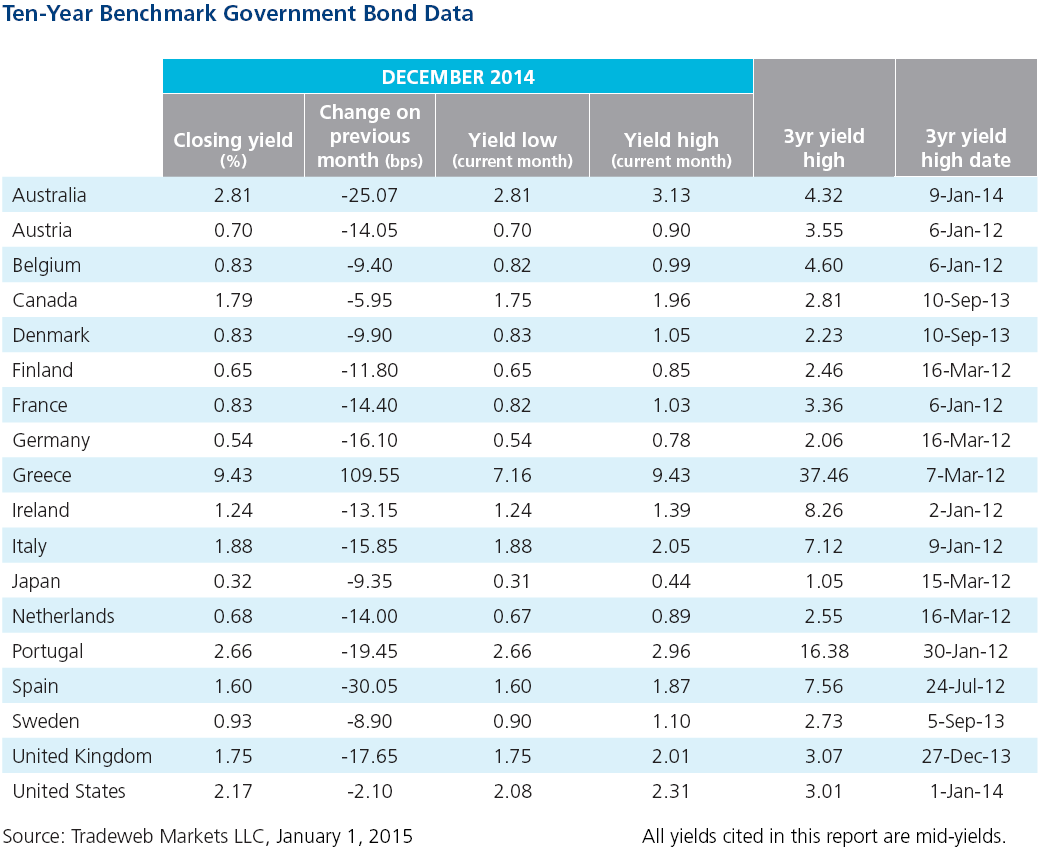