In the second quarter, the U.S. GDP expanded at a 4.2% annual rate instead of the 4% rate initially reported, according to the Commerce Department. In a speech, Federal Reserve Chairwoman Janet Yellen noted that while the economy was improving, the agency was waiting for an indication on the health of the labor market before making a decision on raising interest rates. The 10-year Treasury yields fell during the month, with mid-yields starting at 2.56% and dipping 21 basis points to end at 2.34%. Mid-yields on U.S. long-term debt hit 2014 lows in August, opening at 3.31% and closing at 3.08%. The U.K. also saw strong economic data as the country’s GDP grew by 3.2% during the second quarter. Ten-year gilts, which rallied during the month, started at 2.62%, and dropped 25 basis points to close at 2.37% at month end. Conversely, Japan’s economy contracted by an annualized 6.8% and household spending plunged. Mid-yields on the country’s 10-year benchmark bond decreased 4 basis points to end the month at 0.49%.

Government bond yields continued their decline across Europe in August in spite of the release of soft economic data, and persistent geopolitical tensions in Eastern Europe and the Middle East. European Central Bank President Mario Draghi spoke at an annual meeting of central bankers at Jackson Hole, Wyoming, stating that the ECB was prepared to respond to falling inflation with all available tools. Inflation in the eurozone decreased to 0.3% in August, well under the ECB’s 2% target, while GDP numbers showed that the largest economies, Germany and France performed below expectations. However, mid-yields on Germany’s 10-year sovereign bond closed the month at 0.89% after plummeting 29 basis points from the beginning of August. France’s 10-year bond yields also fell over the course of the month, with mid-yields starting at 1.55% and closing at 1.25%.

Elsewhere in the eurozone, yields for Austria, Belgium, Finland, Italy, Netherlands, Portugal and Spain hit fresh lows. In Italy, the 10-year benchmark bond opened at 2.69% and fell 25 basis points by month end after hitting a high of 2.85% on August 7. Spain’s 10-year bond mid-yields also dropped 27 basis points from the start of the month, touching 2.23% at the end of August. On the other hand, in Eastern Europe, yields on the Ukranian USD-denominated bond maturing in April 2023 climbed 166 basis points during the month to close at 10.03%. 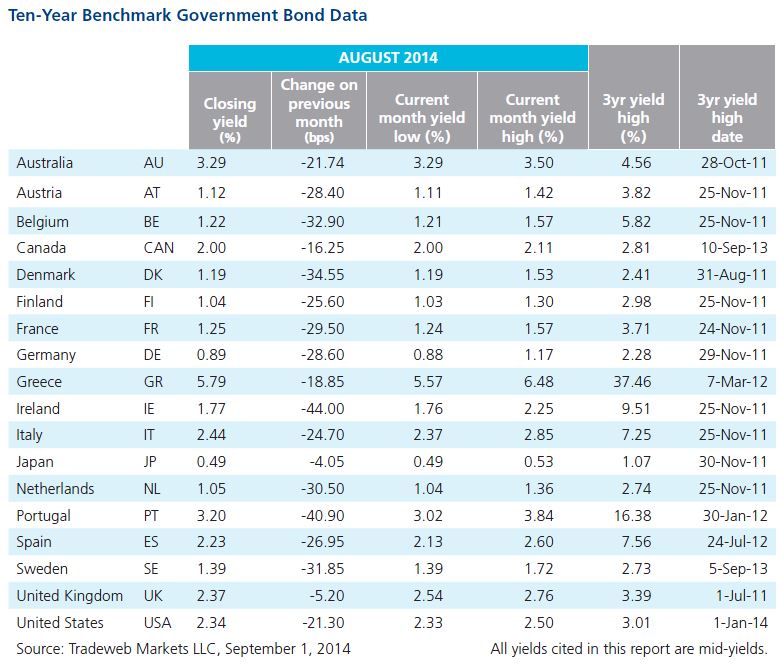