Economic data released during August indicated signs of improvement in the U.S. and in parts of Europe. As a result of this more positive data, a member of the European Central Bank rate-setting panel commented that there was little pressure to cut interest rates in Europe. In the U.S., the minutes of the July Federal Reserve policy meeting, released on 21 August, noted that most Fed officials were “broadly comfortable” with the planned timeframe for reducing then removing quantitative easing, which is expected to end by the middle of 2014.

In this environment, U.S. treasuries and core European markets were sold off during August. Yields on 10-year treasuries hit their highest level since July 2011, reaching 2.9% on August 22, and ending the month at 2.75%. Gilts and bunds saw a similar trend, with the 10-year gilt closing the month at 2.8% (up 42.7 basis points) and the German equivalent ending at 1.9% (up 18.1 bps).

In the European periphery, mid-yields on 10-year debt in Spain and Italy generally fell in the first half of the month, but then moved strongly upwards from August 16, closing at 4.5% and 4.4% respectively. Spreads between the 10-year debt of Spain and Germany fell to 246.2 on August 16, its lowest levels since June 2011, while the spread of Italy’s 10-year bond over the equivalent benchmark bund fell to 230.7 on the same day, its tightest since July 2011.

In Portugal, the Constitutional Court ruled on August 30 that a law making it easier to lay off public employees was unconstitutional, renewing fears that the country would be unable to meet the conditions of its bailout. Yields on Portuguese debt rose 13 basis points on the last day of trading in August, finally closing at 6.7%.

Government debt in most countries was sold off in August, with yields falling in only Italy, Spain and Japan. 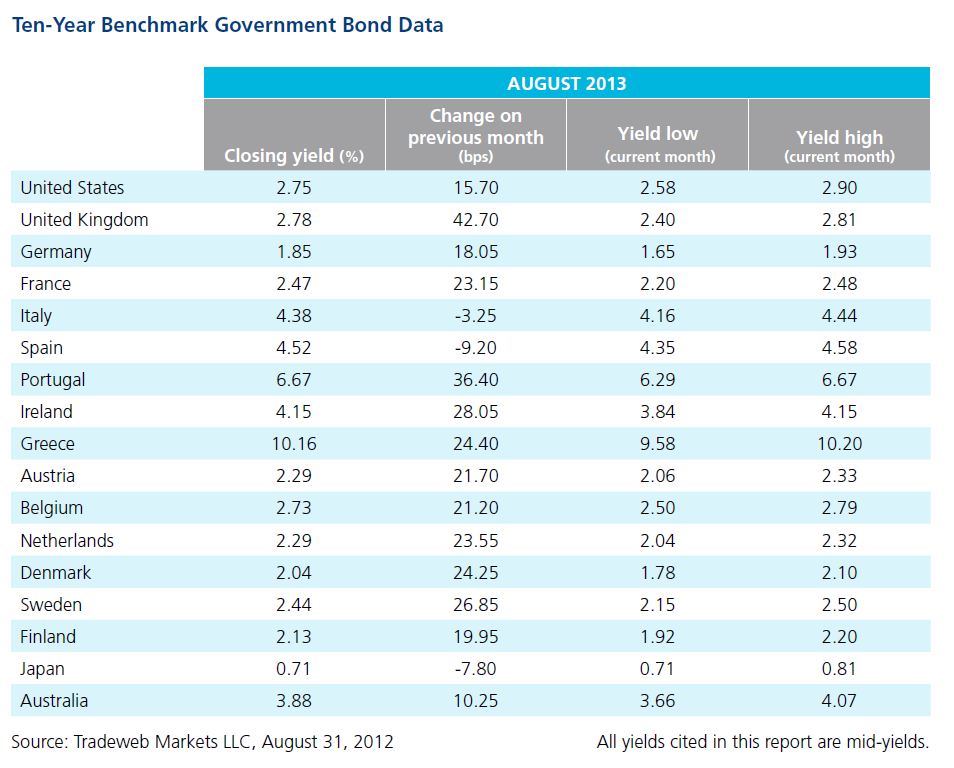