The Federal Reserve continued trimming its bond buying program, while Chairwoman, Janet Yellen reaffirmed the central bank’s commitment to maintaining low interest rates. The mid-yield for 10-year Treasuries fell over the course of the month, starting at 2.76% and ending at 2.65%. Similarly, mid-yields on U.S. 30-year bonds dropped 15 basis points from the beginning of April to close at 3.45%. The UK saw a stream of positive news with the economy growing by 0.8% in the first quarter, on the heels of falling unemployment and earnings growth matching inflation for the first time since 2010. Gilts fluctuated during the month, starting at 2.74%, hitting a low of 2.61% on April 11, and rising to 2.67% at month-end.

Europe’s peripheral economies continued their return to the bond markets amid strong demand for their sovereign debt. Portugal raised €750 million in 10-year bonds in its first auction since April 2011 at an average yield of 3.58%. Mid-yields on the country’s benchmark bond fell to the lowest level since February 2006, starting the month at 4.03% and finishing at 3.63%. Greece returned to the financial markets for the first time in four years, raising €3 billion, with investor demand surpassing €20 billion and an average yield of 4.95%. The mid-yield on the Greek 10-year fluctuated in April hitting a low of 5.83% and ending 27 basis points down from April 1 at 6.14%. In addition, Italian and Spanish yields edged closer to the 3% mark closing the month at 3.07% and 3.02% respectively.

Amid continued geopolitical tension in Eastern Europe, the IMF signed off on a $17 billion rescue package for Ukraine. The mid-yield on the Ukrainian 10-year bond steadily increased in April, beginning at 8.49% and climbing 180 basis points to close the month at 10.30%. In Russia, the government stopped a series of sovereign bond sales and the country’s debt rating was cut by S&P to BBB-, the lowest investment grade. The yield on the USD-denominated Russian sovereign bond maturing in September 2023 increased by 67 basis points from the start of the month to close at 5.52%. 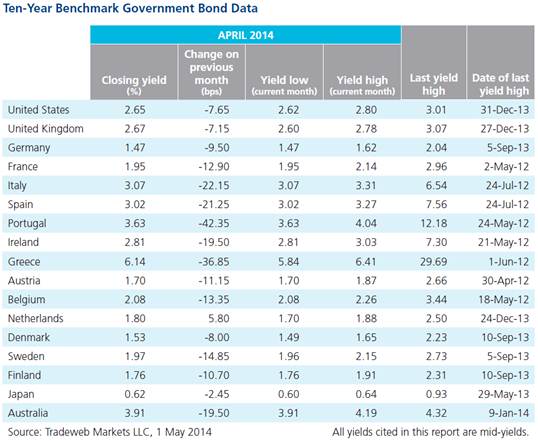