A record volume of the Spanish bonds[1] traded hands on the Tradeweb’s European Government Bond platform last week following the Catalan independence referendum vote. Executed volumes of the Iberian kingdom’s debt were more than double its average weekly volumes for 2017, while trade count was up almost 50%, and were over €3 billion greater than any other week on the platform.

Volumes were 14% higher than trading in French bonds, and nearly equalled the notional volume of German bund activity in the first week of October.

This is the first time since 2013 that Spanish bonds have been the second most actively traded sovereign by volume in the Eurozone on Tradeweb, which launched European government bond trading in 2000. The rise in activity was especially acute in the 10Y sector of the curve, where volumes were over 185% above average, as the benchmark was fairly volatile and finished the week over 10bp higher. 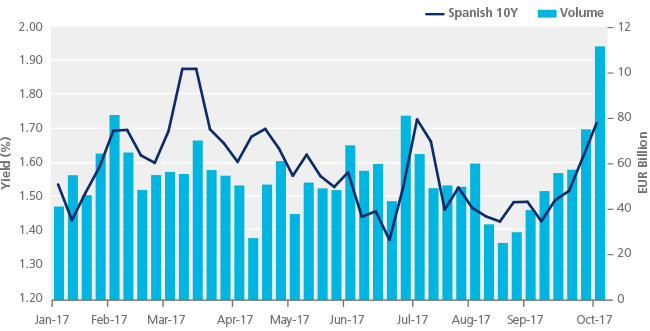